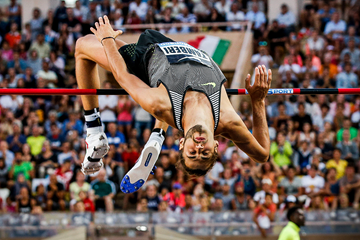 It was a bittersweet Friday night (15) for Gianmarco Tamberi at the Meeting Herculis in Monaco, the ninth stop of this year’s IAAF Diamond League.

The Italian high jumper, fresh off the back of winning gold at the European Championships, was full of enthusiasm from the moment he took to the track. His adoring Italian fans had packed the stand next to the high jump pit, and he indulged them with first-time clearances at 2.22m and 2.37m – the former while still wearing his baggy basketball shorts.

By the time the bar had been put up to 2.37m, it wasn’t just the Italians who were cooing. Tamberi has emerged as one of the sport’s great entertainers, and ‘half shave’ had the whole stadium clapping along to his unique rhythm. He cleared the height first time to match his personal best, sending the crowd into raptures.

With the bar at 2.39m, Bondarenko bowed out with three failures. Tamberi failed his first two attempts, but at the third time of asking he went over to break his own Italian record. Though he nicked the bar with his heels, it stayed put.

So far, so sweet. But his evening was to end with a bitter blow. On his second attempt at 2.41m, he crashed through the bar and rolled off the side of the mat. The next time he could be seen was on a stretcher nursing his left ankle and waving meekly to the stunned crowd.

The Olympics are just four weeks away. Even if he recovers his fitness, the lack of form could dash his gold medal dreams.

Last month in Birmingham, her most recent IAAF Diamond League appearance, Caterine Ibarguen suffered a rare defeat, ending a 34-competition winning streak. But she started up again in Monaco with a performance of fantastic consistency to stay top of the Diamond Race standings.

The Colombian reached 14.87m in round three before going out to 14.96m with her final effort, just eight centimetres short of her season’s best.

“I am extremely satisfied,” the world champion said. “I was very relaxed tonight. All of my jumps were good. I am pleased with all six of them. Now I have to resume training and head into the most important one: Rio.”

World indoor champion Yulimar Rojas was the best of the challengers, going out to 14.64m in round five. Jamaica’s Kimberly Williams was third with 14.47m. Olympic champion Olga Rypakova, the woman who beat Ibarguen in Birmingham, was down in sixth with a best of 13.97m.

In the women’s javelin, Tatsiana Khaladovich followed up her European Championships gold medal with her first IAAF Diamond League win. The Belarusian prevailed in a cagey contest courtesy of her opening 65.62m effort.

World champion Katharina Molitor was well down on her best. The German could only manage 58.63m that left out of the throwing after three rounds. Madara Palameika was fourth with 62.79m, but stays top of the overall Diamond Race standings.

Before Monaco, Jamaica’s Damar Forbes had only ever recorded one win on the IAAF Diamond League circuit. But he looked like a seasoned winner in as he opened up with three eight-metre jumps that none of the field could respond to.

The third of those was 8.23m, just two centimetres down on his personal best, and was enough to seal the win over Fabrice Lapierre. The Australian was the only other man to go beyond eight metres, his 8.21m fourth effort the closest he came to unseating Forbes. It was enough at least to keep him on top of the Diamond Race standings.

“It is amazing to win a Diamond League and especially here in Monaco after what happened last night,” said Forbes, referring to the tragic events in nearby Nice. “Every Diamond League is to help me get to Rio. Rio is always on my mind.”

China’s Gao Xinglong finished third, going out to 8.00m with his final effort after posting a valid mark with every one of his jumps – no mean feat given the breeze.

Piotr Malachowski came to Monaco off the back of winning his second European title, and he looked unbeatable as any four of his legal throws could have won, despite appearing to be throwing at less than 100%.

His fifth-round throw of 65.57m was the best of his six efforts, and it secured him his fourth IAAF Diamond League win of 2016 to give him a commanding lead in the overall standings.

Sweden’s Daniel Stahl produced a final-round throw of 62.87m to take second over Mauricio Ortega, who recorded 62.27m in round two. Robert Urbanek, the Pole who is second in the Diamond Race standings, looked out of sorts as he finished in seventh with 59.62m.