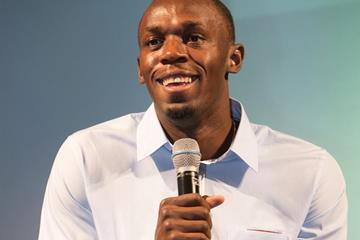 Jamaican sprint superstar Usain Bolt made two major revelations when speaking to the world’s media ahead of the 2013 World Athletics Gala in Monaco on Saturday (16).

The first was that he would attack his own 200m World record of 19.19 set when winning at the 2009 World Championships in Berlin.

“I have only been back in training for a week and a half and my muscles are a bit sore, but I will be OK. I will have a check-up with the doctor as a precautionary measure to make sure I am ready to attack that World record.

“The 200m is much easier than the 100m to try for a record and that would be my main focus this season,” commented Bolt, who has never made any secret of the fact that he prefers the longer sprint over the 100m.

Bolt has also said frequently in the last year that he will seek three more Olympic Games gold medals at the Rio 2016 Olympic Games and then retire but he opened up the possibility that he may not hang up his spikes in three years’ time and will compete at the 2017 IAAF World Championships in London, making a return to the track he set alight in the summer of 2012 at the Olympic Games in the British capital.

“I was having some talk about this with my coach, and he was saying people had said I should go for another year,” he admitted.

The audience refrained from uttering the famous political chant ‘Four More Years’ but the most famous face in athletics, and perhaps in any sport, is now considering not leaving the stage quite as soon as previously advertised