The ultimate test for the Beijing Olympics Marathon course, a real Marathon with real competitors, turned out to really be just a test and not a real race. Only a handful of competitors tried to run an even and as fast as possible Marathon and the best the race had to offer competitively was two Mongolian national records.

But there was more in this race than what the slow winning times 2:14 for men and 2:30 for women suggest. Most of the Chinese and Japanese chosen to their Olympic teams were running, but the style for testing the Olympic course was very different. Japanese contestants were really enjoying the views along the route and thinking about their Olympic tactics, such slow was their pace.

The race started off in cool conditions and rain which followed the competitors throughout the Marathon. Temperature was between 12-15 degrees Celsius during the competition, but like the race walks earlier this weekend showed, top results are hard to achieve in Beijing.

With Ren out of the way, the following pack with three runners Ser-od Bat-ochir of Mongolia and Chinese Li Zhuhong and Han Gang took over. The Mongolian kicked right after the half point and left the Chinese behind and although they did gain some ground on him later on, Bat-ochir went on to win the race in a national record 2:14:15 bettering his own 2:16:22 mark from the Beijing International Marathon last year.

Because of the nature of the race it’s hard to tell whether the Chinese fell off the pace because they could not stand it or if they just chose to do it that way. This was a very peculiar race, almost like a training run for most. Li Zhuhong went on to take second place in 2:15:32 with Han Gang, the Chinese Olympic contestant, falling way back late in the race to take third in 2:21:15.

Han, who clocked 2:08:56 in Beijing last October, suddenly lost 1.5 minutes to winner Ser-od from half marathon point to 25km and curiously gained back that 1.5 minutes from 25km to 30km and was the co-leader with Ser-od in 1:34:23. But then again Han dropped quickly back losing 4,5 minutes in the next 10km.

Same script in the women’s contest

The women’s race was almost a copy of the men’s one. Chinese Wei Yanan, who ran 2:25:10 earlier this year at the National Championships marathon in Xiamen, was the early leader who left the others behind from the start of the race. Already at 5km Wei was the leading the two Chinese Olympic team members, World Championships silver medallist Zhou Chunxiu and Osaka 4th placer Zhu Xiaolin, by more than a minute. Wei reached 10km in a fast 34:04 followed by Chinese Chen Rong (34:17) and a real surprise name of this season, Wang Jiali (34:18), who three weeks ago sliced 11 minutes off her personal best to win the Zhengzhou marathon in 2:26:34.

Wei continued to accelerate covering the next 5km in 16:20 and reached the half marathon in a fast 1:11:07 before dropping out. Chen was already almost two minutes behind here reaching the halfway in 1:12:56 followed by Zhang Shujing in 1:13:39 and Wang Jiali in1:13:52. But Zhang and Wang followed Wei’s example and their race was over after the half. Zhou Chunxiu and Zhu Xiaolin ran an extremely even paced sightseeing of Beijing today clocking 1:17:22 at halfway well behind leaders.

In the end Chen Rong had no competitors left for the second part of the race and she too slowed down to win in 2:30:42. Zhou Chunxiu and Zhu Xiaolin, running side by side for the whole race were both timed 2:37:49 for 2nd and 3rd place respectively. Japanese Olympic contestant Reiko Tosa was fourth in 2:46:26 with Briton Mara Yamauchi following for fifth place in 2:46:58. Otgonbayar Luvsanlkhudeg clocked a national record for Mongolia in sixth place clocking 2:47:12 bettering 2:50:28 record from the 2006 Beijing Marathon.

The Good Luck Beijing test competitions will end with a four-day track and field competition at the National Stadium “the Bird’s Nest” on 22-25 May. 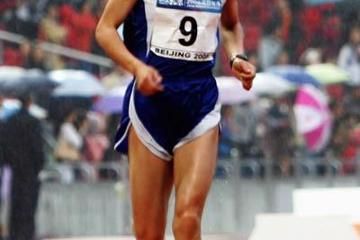