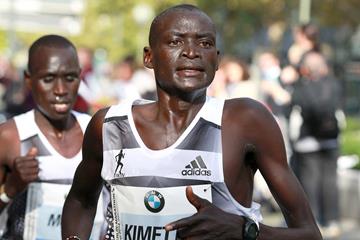 Following the tradition set by Haile Gebrselassie in 2007 and continued by Wilson Kipsang in 2013, Dennis Kimetto’s first race after breaking the marathon world record will be at the Montferland Run in ‘s-Heerenberg on 7 December.

And for the first time ever in the event’s 18-year history, both marathon world record-holders will be in action as Paula Radcliffe will line up for the women’s event.

While Gebrselassie won in ‘s-Heerenberg in 2007, Kipsang finished a distant fifth in 2013.

Kimetto will be hoping to follow more in Gebrselassie’s footsteps by taking victory in the Dutch city. The Kenyan has experience of the course too, having finished sixth at the 2012 edition of the race when Geoffrey Mutai won in a course record of 42:25.

When it comes to this particular race, Radcliffe has considerably less experience than Kimetto. The 40-year-old has never raced on Dutch soil, nor has she ever contested a 15km race.

Having battled with a long-term foot injury over the past few years, the multiple world champion on the roads and cross country recently made a low-key return to racing in a quest to be fit enough to contest next year’s London Marathon.