The stage was set and the fans came out in their numbers on Sunday (1) when it would take a real betting man to go against Usain Bolt and Veronica Campbell-Brown in the men’s and women’s 200m finals. However, while both Bolt and Campbell-Brown were seeking to avenge their 100m defeats, Yohan Blake and Shelly-Ann Fraser-Pryce were determined to cop the sprint double, which they achieved to close out a great Supreme Ventures-sponsored Jamaican Championships, or better yet, set them both up for Olympic glory.

And, on the night in question, 7:15 to be exact, Fraser-Pryce, like in the 100m two nights before where she dropped a national record 10.70, was at her very best again, untested by Jamaica’s sprint queen Campbell-Brown. Both got out well, but Fraser-Pryce saw the straight first, and despite Campbell-Brown closing slightly in the latter stages, she was not going to catch the winner. Fraser-Pryce crossed the line in a personal best 22.10 seconds.

Asked about the race, Fraser-Pryce was quick to point out, "I am still learning the event."

Campbell-Brown, the defending Olympic champion, was also passed on the line by Fraser-Pryce’s training partner Sherone Simpson, who had a very good final third of the race, to finish in 22.37 ahead of the Twice Olympic champion's 22.42.

Bolt: 'Just have to get my things together and get it done'

However, whereas that was exciting, the race the spectators wanted most was up next with Blake drawn in lane 3 and Bolt in 6. Both ran the curve very well, but Bolt, who led into the straight was not allowed to lead in the homestretch for long as Blake took charge and ran away nicely to take victory in 19.80.

Blake was quick to point out that his success here would not get the better of him because the bigger one is yet to come.

"It's not over. I still have the Olympics to go. I just wanted to keep performing and keep going," said Blake.

Bolt said he was "very sad with my turn", characterising it as "awful". He, however said, "I've been working more on the 100 metres."

He added: "I can't blame it on that, though. Just have to get my things together and get it done."

Glen Mills, who coaches the top three finishers, said, "He (Bolt) might be a little off at the moment, but I'm sure when the time of delivery comes around, he'll be on top of his game."

Brigitte Foster-Hylton delivered yet another national championship victory by posting a time of 12.68 to beat training partner Latoya Greaves and Shermaine Williams, both of whom had personal best times of 12.77 and 12.80 respectively.

Williams won the women's Triple Jump in 14.52m while Scott, the Shot Put winner, secured his ticket to London with 20.72m. 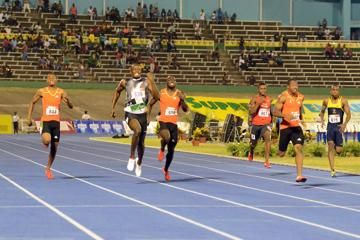