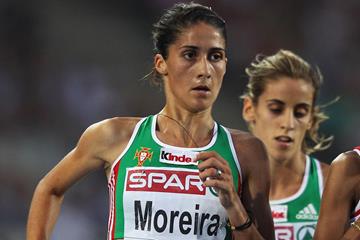 Moreira successfully defended her title with a personal best of 31:23.51, the fastest by a European this season. Her mark was also well inside the Olympic A standard (31:45.00) as was the runner-up, Jo Pavey of Great Britain, who clocked 31:32.22.

Pavey narrowly missed selection to the British Olympic squad for the marathon but is now one big step closer to a fourth Olympic appearance.

Christelle Daunay, the French national record-holder in the marathon, was third in 31:35.81 to finally add the 10,000m to her national record accolades. The previous French standard, 31:42.83, was set by Rosario Murcia in 1992.

Kemboi Arikan, the former Kenyan Paul Kipkosgei Kemboi, missed the Olympic A standard by some 11 seconds but was well within the 28:05 B standard.

Spain took the men's team title by more than a minute ahead of Portugal with France finishing third.

Great Britain captured its first women's team crown with a 14-second margin over Italy. Portugal, the team winner nine times, was third on this occasion.