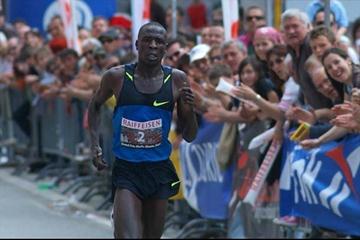 Mosop, a 2005 World 10,000m bronze medallist, led in the early stages of the 10km road circuit, with Kiprop, the winner of the last two editions of the Vallagarina Cross Country race, following closely along with Italy’s Stefano Baldini, the 2004 Olympic Marathon champion, Ukraine’s Sergiy Lebid the eight-time European XC champion, Tanzania’s Samuel Shauri and Ethiopian Tolossa Chengere. This group ran the first lap which is longer than the remaining seven laps in 3:50.

Kiprop briefly took the lead in the third lap increasing the pace gradually. There was a split of 3:44 for the second lap and 3:36 for the third lap.

Mosop threw down the gauntlet increasing the pace with a decisive kick in the fourth lap (3:26) and broke away from the rest of the field.

Kiprop, who ran 13:30.13 for the 5000m indoors in Düsseldorf this winter, led the chasing pack with Tanzania’s Shauri, fourth at last week’s Stramilano Half Marathon, the closest in attendance.

Mosop continued to increase his pace during the fifth lap (3:22) building up a gap of 30 seconds on Kiprop. Martinez caught up with Kiprop and fought with the Africans for the minor podium places.

Mosop, who contributed to the Kenyan win in the men’s team race at the IAAF World Cross Country Championships in Amman with his eleventh place, kept up a strong pace until the end crossing the finish-line in 28:52.

For Mosop, the husband of World Cross Country champion Florence Kiplagat, it was the second consecutive win in eight days after his first place in the Trofeo Alasport in Alà dei Sardi on 5 April.

“I wanted to win this race after finishing second here in 2007 and 2008,” said the winner.  “I like the nice course and I enjoyed the warm support from the crowd along the course. I am now going back to Kenya to prepare the World Championships in Berlin where I will run the 10,000 metres. My goal is to run under 27 minutes in the 10,000 metres this summer.”

Kiprop, Martinez and Shauri engaged in a hard-fought battle for the runner-up place in which the Kenyan prevailed by one second in 29:21 thanks to his devastating kick. Lebid finished fifth in 29:37. Stefano Baldini, who ran the last marathon of his career at the Olympic Games in Beijing, finished a distant eleventh in 30:40.

The Media Blenio Grand Prix in Dongio in the Italian speaking region of Canton Ticino, celebrated its 25th edition this year. This race which is traditionally held on Easter Monday, was organised for the first time in 1985 to honour the Olympic silver medal won by Swiss distance runner Markus Ryffel in the 5000 metres in Los Angeles 1984. The Media Blenio boasts a proud history with past wins by Paul Tergat (three times winner in 1993, 1996 and 1997) and Haile Gebrselassie (winner in 1995). Other notable winners were William Sigei (1994), Evans Rutto (1999), Richard Limo (2004) and Edwin Soi (2006, 2007 and 2008).