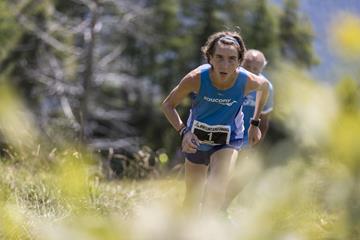 In challenging times, mountain runners united by sense of perspective

Of all the communities within the sport of athletics, mountain runners spend more time outdoors than most.

So when restrictions for outdoor activities and exercise are introduced, as has been the case in recent weeks during the coronavirus pandemic, it has been particularly challenging to maintain a decent level of fitness for runners who routinely log anywhere between 100 to 200 kilometres per week.

The World Mountain Running Association (WMRA) spoke to some of the world’s leading mountain runners and found that what united them all was a stronger sense of community and a feeling that this crisis puts running into perspective.

“Life has changed drastically,” he said. “Everyone is supposed to stay at home and avoid social contacts as much as possible: it's the only weapon we have to fight the virus, and we don’t know how long all this will go on.

“Running is permitted but only under particular circumstances. I am currently training, just at a slightly lower intensity than before. I think everyone in this situation should have the sensibility to understand if, when and how to run. It should be done with discretion and care. This is a form of respect for those who are suffering.

“It doesn’t mean that all the work I did has been wasted,” adds Puppi, who had been due to compete at the Rotterdam Marathon. “I am still proud of what I managed, of the big effort I put into those 110-mile weeks, the sore legs, the long workouts, of the improvements and setbacks I’ve experienced on this journey. It’s just a matter of re-thinking our goals.

“Keep on running because this is something we love and makes us feel good, even in the worst situation.”

For 2019 WMRA World Cup winner Andrew Douglas, the situation in the UK, and in his home nation of Scotland, is ‘rapidly changing’.

“I’m just trying to appreciate every chance I get at the moment to put my trainers on and head out for a run,” said Douglas, who is anticipating the introduction of stricter measures like those in Spain, France and Italy.

“Undoubtedly it’s disappointing to see this having such a profound impact on races, but personally the effect it has on me pales in comparison to the much bigger issues facing society, so ultimately it’s just about getting some perspective. I had my best ever season last year so that’s something I’m fortunate to be able to have at the back of my mind.

“Like most people, I have not experienced anything like this in my lifetime, so as much as my working environment is changing, my training at the moment is the one ordinary thing I can rely on for the moment in these extraordinary times.”

“When pubs are closed in Ireland, then it's definitely serious,” said Irish runner Zak Hanna.

“The mountains aren't going anywhere any time soon, so just keep calm, weather the storm and we will all come through this. As the Irish Taoiseach Leo Varadkar said, ‘Let it be said that when things were at their worst, we were at our best’.”

Mimmi Kotka, who is from Sweden but lives in France, is into her third day of confinement. The 2018 Marathon du Mont Blanc winner is allowed to exercise outdoors but must stay close to home. “You have to carry a certificate for this too, stating where you live and what your errand outside is,” she says. “Adjusting to new circumstances is part of being human; we need to deal with it. If you’re healthy, be grateful for that. And this is about doing what’s right; after all, running is a leisure activity.”

“In order not to clog up extra resources in hospitals, we're not allowed to go very high up into the mountains,” adds Britain’s Sarah Tunstall, who is based in France. “The mountain rescue teams and workers who control the avalanches at this time of the year are also isolating so it makes the mountains especially dangerous.”

British mountain runner Natalie White, who is currently based in northern Italy, one of the hardest hit areas, says: “Doing our part is going to help not just ourselves but others. Some areas are allowing runners to go out, but close to home and solo. That in itself is a positive to be grateful for.”

The picture in the USA is similar. But 24-hour world record-holder Camille Herron points out the importance of sticking to a routine, even in challenging times.

“Maintaining my normal routine of running twice a day has helped me feel positive,” she says. “I'm focused on getting in good mileage and remembering I still have goals in June and beyond. Exercise helps with physical, mental and emotional health, so I know it's important to continue with my routine, while also mixing it up to keep it fun.

“I do trail runs with a friend in the area, so we're trying to be respectful of social distancing while also being trail safe and running with a buddy in any remote areas.”

Now, more than ever, we are one team. We got this 💪💪! #playinside #playfortheworld

Herron also urges athletes to ask themselves daily ‘how do I feel?’ and work with that. “Maybe it isn’t a time to stick rigidly to a training plan, but to enjoy the outdoors and treat exercise as a way to benefit overall health.”

“Think of this time as just putting money in the bank,” added Washington-based runner Maria Dalzot. “You may not be using it now, but it sure is going to come in handy later on when you make the deposit either in the fall or next year.”

It’s not just the athletes who are affected either. Competition organisers have also been hit by the crisis. US runner Max King, who is also race director of the recently cancelled Bend Marathon, asks his fellow athletes for their understanding in these difficult times.

“Some people don't understand how hard it can be for a race director,” he says. “We're not given a choice about cancelling and it's not always possible to give everyone’s money back and still be able to have a race next year. We're small businesses most of the time and we've worked all year to bring racers a unique experience. It's not like all the work and expenses are on one weekend. I think people need to understand that.”

WMRA Council member Nancy Hobbs urges runners to practise social distancing. “It is challenging when running with someone else to not speak, of course, and the further apart you get from someone, the harder it is to communicate,” she says. “However, doing track workouts with friends can be modified. Being creative is the key.

“One of the most important things is to check in with your running friends,” adds Hobbs. “It’s crucial to support one another.”