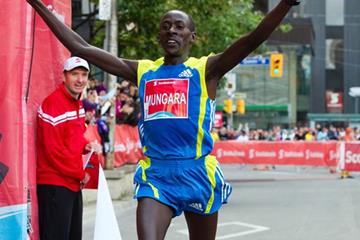 Toronto, CanadaKenneth Mungara ran away from a world class field at 37km to win his third consecutive Scotiabank Toronto Waterfront Marathon today (26). In doing so he lowered his year old Canadian All Comers record to 2:07:57.

In the women's contest of this IAAF Silver Label Road Race, Sharon Cherop romped to a 2:22:42 win, the fifth fastest run of the year and also a Canadian All-Comers record.

Several times he looked over his shoulder but the outcome was never in doubt as his countrymen Jafred Chirchir and Daniel Rono bravely chased but couldn’t catch him. The expected Ethiopian challenge never materialised as Chirchir ran a personal best of 2:08:09 ahead of Rono’s 2:08:14.

Conditions were perfect for distance running with the temperature reaching just 11 C. degrees by the finish. The pacemakers were able to tow the field of a dozen contenders through the half way point of this flat fast course in 63:42. Mungara only became a full time runner two years ago. Until that time he had been a barber in his town of Limuru, Kenya.

“I had a hard time training back home,” said the winner. “So now I have to go back and relax. I had to stick with the group today because we had pacemakers and they had to do their work. I looked around but I had to maintain my pace. I was not afraid (of them catching me). It is a game.”

At the post event press conference Mungara was asked if he will now go to a ‘bigger event like Boston or New York’. The affable Kenyan smiled and admitted he has already promised race director Alan Brookes he will return next year. In his mind Toronto is a world class event.

Canadians Reid Coolsaet and Eric Gillis, who train together, also took advantage of the conditions to record personal bests. Coolsaet has won numerous national titles over 10,000m and only turned to the marathon a year ago. After winning the 2009 national title he finished 25th at the IAAF World Championships in 2:16:53. Today he achieved Athletics Canada’s Olympic qualifying standard with a huge personal best time of 2:11:22 good enough for 10th place.

“I have been injured off and on the last two years and I haven’t been as ready for a race in three years as I was for this,” the 31-year-old from Hamilton, Ontario said. “It’s been three years since I felt this good. The weather was perfect today. I knew I had to take advantage of it so I went out 65 minutes low and was still on Canadian record pace. I faded a bit but I rallied to get the Canadian Olympic standard.”

Gillis was 11th in 2:12:07. He made his marathon debut in Houston last January with 2:13:52. The 2008 Canadian Olympian was tremendously relieved with his effort.

“I didn’t like my preparation at all. with all the extra stress with the knee (tendinitis) and all that,” he explained. “I have to get on top of that and next time out get the confidence that Reid had and blast next time out. Reid and I were discussing doing Rotterdam or London, something fast.”

The women’s race was a brilliant competition with four athletes beating the Canadian All Comer’s record, held by Lydia Simon of Romania since the 2001 IAAF World Championships in Edmonton.  Despite falling on the road at 30 kilometres Sharon Cherop of Kenya was able to recover and just hold off Ethiopia’s Tirfi Tsegaye with a huge personal best performance of 2:22:42.

Tsegaye was timed in 2:22:44 with fellow Ethiopian Merima Mohammed lowering her personal best to 2:23:06.

“This was my first time in Canada and I want to come here next year,” she declared.  “The first kilometre was flat and fast but the second had some small hills. In Hamburg there was no one to push me. Today it was good.”

“When I started the move it was my plan to go then to win the race. I expected to run well because of the training I had done. I was thinking about running 2:25 but 2:22 came out of it. I came to realise that the Ethiopian was not going to catch me with 100 metres remaining.”