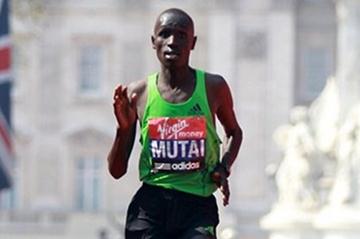 Emmanuel Mutai will lead a six-strong Kenyan assault on the 2012 Virgin London Marathon in April when he defends his men's title against world record holder Patrick Makau just three months before the London Olympic Games.

Mutai smashed the London course record to win the 2011 race in 2:04:40, but he may have to be even quicker in 2012 as competition will be fiercer than ever with places on Kenya's Olympic team up for grabs.

Kenyan Olympic selectors named a provisonal list of six men for the Games earlier this week with the final three to be announced on 30 April, just eight days after the London Marathon.

As well as Mutai and Makau, the list includes double world champion Abel Kirui and Frankfurt champion Wilson Kipsang. All four will race in London on 22 April along with two other Kenyan contenders: three-times London champion Martin Lel, who was second last year, and Vincent Kipruto, the world silver medallist in Daegu.

After finishing third in London last April, Makau won his place on the selectors' shortlist when he broke Haile Gebrselassie's World record in Berlin last September with 2:03:38. Kirui sealed his spot when he retained his World title at the IAAF World Championships in Daegu, Korea, last summer.

Mutai followed up his record-breaking London victory by finishing second in New York last November, pocketing half a million dollars as World Marathon Majors champion. Kipsang was just four seconds outside Makau's World record when he retained his Frankfurt title at the end of October.

The other men named by Kenya's selectors are Geoffrey Mutai and Moses Mosop, who ran superfast times to finish first and second in Boston last April, the fastest race ever run. Mutai will compete there again just six days before the London Marathon on 16th April and Mosop will take part in Rotterdam on 15 April, seven days before London.

Kenyan runners won all six World Marathon Majors races in 2011 plus virtually every other significant city marathon. They also filled all but three of the top 20 places on the 2011 world list, so it's no surprise that the six Kenyans hold the six fastest times in a London elite field that includes 10 men who have run 26.2 miles in under 2:06.

Virgin London Marathon race director David Bedford said: "Last year was an amazing one for Kenyan marathon runners around the world and we are delighted to welcome this hugely talented half dozen to London for the 2012 men's race.

"With the Olympic men's marathon due to be held here exactly 16 weeks later, we expect the battle for podium places to be even more ferocious than usual."

The Olympic Games will be on the minds of many other athletes too, including Ethiopia's Tsegaye Kebede, the only non-Kenyan to win the London men's title in the last eight years.

Following a mixed year in 2011, when he was fifth in London and third in New York, the talented 2010 champion leads the challenge to Kenyan dominance again this year.

Kebede's compatriots include Bazu Worku, the former world junior record holder who was third in Berlin in 2010 aged just 20, Feyisa Lelisa, bronze medallist at the Daegu World Championships, Markos Geneti who won the Los Angeles marathon on his debut last year, and Abreham Cherkos who was fifth in Boston.

Tadese will be supported by two other quality Eritreans in Yared Asmeron and Samuel Tsegay, both quicker than 2:07:30, while Gharib will have fellow Moroccans Abderrahim Bouramdane and Adil Annani for company. Australians Scott Westcott and Martin Dent are also in the line-up.

Olympic selection is the goal for Britain's men too. There are two spots to fill after Scott Overall secured his place finishing fifth in Berlin. The contenders need to be first Briton home and run faster than 2:12 to qualify.

Among them are Newham's Lee Merrien, who was 14th in 2011 in a personal best of 2:14:27, and four athletes who have run around 2:15 – Benedict Whitby of Windsor, Slough, Eton and Hounslow, Andi Jones from Salford, Phil Wicks of Belgrave and Morpeth Harrier Ian Hudspith.

Also in the running are Ben Moreau, Anthony Ford, Martin Williams, Phil Nicholls and John Beattie, while James Walsh will make his debut.

"The battle for British Olympic places will be an intriguing part of next year's race," said Bedford, a member of UKA's marathon selection panel.

"With the Olympic Games in London just three months later the incentive for British marathon runners couldn't be greater."