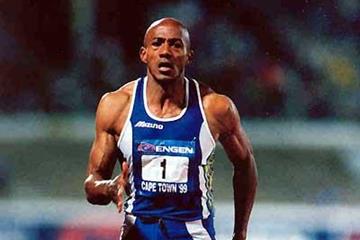 Namibian sprinter Frank Fredericks gave the thumbs up to his All Africa Games (AAG) participation here on Monday, saying he is over the worst of the back problem which forced him out of the World Championships.

Fredericks, silver medallist in both the 100m and 200m in the last two Olympics, said he would be taking part in the 100m and the 4x100m relay.He added he was not yet certain about the 200m - the event in which he won the world championships in 1993 - because it hurts his back when he runs the bend.

"I'm over the injury, it took a week," he said of his recurring sciatic nerve complaint which occurs in the lower back.

Fredericks, who has struggled with the injury for a couple of years, ran the 200m at the IAAF Grand Prix final in Munich on Saturday, finishing fifth in 20.26 behind Claudinei Da Silva of Brazil in 19.89 and American Maurice Greene in 19.90.

"I'll do the 100m and see how it goes," he added. "The relay, I'm definitely going to do that because we've got a young team who are as keen as hell....Hopefully I can take back a medal or two back home," he said.

Fredericks believed the AAG were a vital showpiece for the continent.

"I'm very happy to be here. I think this is a very important games for Africa to show the rest of the world we can put on a showcase of this magnitude," he said...I could have called it a day for the season after the World Champs, but I believe this is as important as the Olympics because this is for my continent. They've always been at the top of my calendar."

The athletics competition begins at Johannesburg stadium on Tuesday with the 100m. The relay will be held after the 100m final on Wednesday evening and the 200m begins on Friday.

In other events Mozambique's world 800m silver medallist and Atlanta third placer Maria Mutola, hopes to use the Games as a stepping stone towards that elusive 800m Olympic gold in Sydney.

Hezekiel Sepeng, meanwhile, is favourite for the men's 800m having earned a world silver medal, the only medal won by South Africa in Seville.

Sepeng, who will be up against compatriot Johan Botha, the World Indoor 800m Champion, is the current Olympic and Commonwealth Games silver medallist and he hopes finally to earn gold.

Algeria's world 800m bronze medallist Djabir Said-Guerni is also expected to compete and be a strong threat to the 25-year-old South African.

Other title favourites include 1997 javelin World Champion Marius Corbett of South Africa who is now over his hamstring and forearm problems.

Hestrie Storbeck-Cloete should earn gold for South Africa in the women's high jump. She posted a Commonwealth, African and South African record of 2.04m in Monaco recently, which also happened to be the world's best performance.

Buoyed up by the home crowd, she may finally jump 2m in her native country for the first time.

Okkert Brits, who reached the final in Seville despite an eight-week break due to injury, is favourite for the men’s pole vault. Defending champion Brits is one of the few men to have logged a 6m jump in official competition.

Elana Meyer, the 1992 Olympic 10,000m silver medallist and world half-marathon record holder, is set to claim the 10,000m title according to the form book.

Those set to miss the event include 10,000m world and Olympic champion Haile Gebrselassie of Ethiopia, and Kenyan runners Daniel Komen, Paul Tergat and Japhet Kimutai.

Morocco, who earned the world men's 1,500m title with Hicham El-Guerrouj, will once again not be competing as they have not done since 1978 because of their suspension from the Organisation of African Unity because of the situation in the Western Sahara.