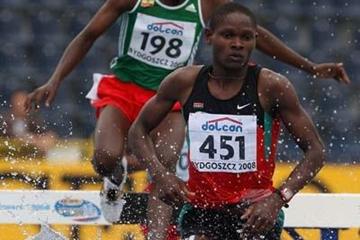 Jonathan Muia Ndiku of Kenya on his way to victory in the Final of the Men&#39;s 3000m Steeplechase (Getty Images) © Copyright
14 JUL 2008 General News

Ndiku’s crash-course does the trick

One month ago Boniface Teren took over as Kenyan national steeplechase coach and in that short space of time appears to have transformed Jonathan Muia Ndiku’s technique. That may have proved the key to his victory in a dramatic 3000m steeplechase on Sunday at the World Junior Championships.

Ndiku’s coach, Paul Mutwii, pointed out to Teren the athlete’s big weakness and Teren set about solving the problem. It seems to have worked for the athlete who came into the championships with a PB of 8:29 and ran 8:17.28 in the final.

“When I took up the job with the Kenyan team, I wanted to work on his technique over the barriers,” said Teren, moments after Ndiku punished Uganda’s Benjamin Kiplagat for his early suicidal pace and passed him on the last lap.

“He had a very poor technique, but he has improved tremendously. I am really impressed how well he took my advice and that is why he has really started running well.”

Ndiku, who was fourth in the 2000m steeplechase at last year’s World Youth Championships, has been running only four years, saying he took up the sport as he saw it as a way of making of living.

Teiren reckons the 16-year-old has plenty of improvement still to make.

“With good guidance, he can run under eight minutes. He has a bright future,” said Teren.

Looking up to Bekele

Ndiku hails from the Machakos District, in Kenya’s Eastern Province. The district, which has a population of about one million, is not famed for producing great runners, said Teren. That could be why Ndiku names Ethiopia’s world cross-country champion Kenenisa Bekele and not another Kenyan as his idol.

Ndiku, who says he eventually wants to break Bekele’s World records at 5000m and 10,000m while continuing to run steeplechase, trains in Nairobi with, among others, Patrick Terer, the Kenyan who won bronze on Sunday.

The win looked unlikely to onlookers at one stage of the final because of Kiplagat’s sizeable lead.

Kiplagat, the World No.1 this year with 8:14.29, stormed off to one of the fastest-ever starts to a steeplechase.

However, both Ndiku and Teren were confident.

“I expected I would catch the Ugandan,” said Ndiku.

Kiplagat admitted afterwards that he had started too quickly, although he did not believe the result would have been different had he paced it better.

“I usually start quickly,” he said. “I like to have someone with me, though, so we can push together. I was not expecting to run 2:35 for the first kilometre, but 2:45. It was too fast – it was World record pace.”

Maybe the World record will come one day – at least Teren believes so.

“I have a lot of respect for him,” he said of Kiplagat. “This guy could break the world record. If he works on his technique, I am sure he will.”