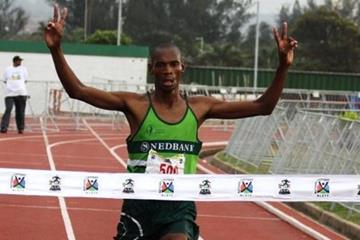 A lead group of about 30 athletes broke away from the rest of the field covering the opening 5km in a modest 16:12. They included former champion Ngamole and George Mofokeng as well as seasoned campaigners Enos Matalane, Richard Mavuso, Benedict Moeng, and Butiki Jantjies.

Only Moeng, Doctor Mtshweni and David Ngake responded. After a while they seem to have given up the fight to catch up and challenge Ngamole. Instead the settled for the battle to take the minor positions as Ngamole steadily opened a huge gap upfront.

“I came to this race aiming to win as a consolation after missing out on being selected to run the Marathon at the Commonwealth Games in (New Delhi) India,” Ngamole said. “We were running into a strong head wind for most of the first half of the route. So I held back at the tail end of the lead group. Once we turned around heading back into the city, the wind was behind us, I decided it is time for serious business.”

“I have won the national 10,000m championship and this marathon here in eThekwini. This is a favourite venue for national events and I was determined to make sure I win another national title today,” a delighted Ngamole said.

Second placed Moeng improved his personal best by 94 seconds from his 2:19.37 run at the 2007 Soweto Marathon. “Once the pace picked up in the second half of the marathon, I relied on speed to carry me through. I lacked the endurance as I have not run enough mileage in raining. I look forwards to improving my time,” said Moeng.

Although she comfortably won the women’s race Zimbabwean defending champion Samukeliso Moyo was not her usual enthusiastic self.

“It is always good to retain one’s title. But today I did not really enjoy the race because the level of competition was low,” said Moyo, who won my more than 11 minutes in 2:48:56.

“Last year I had to work much harder to win. It was more like a training run this time. After three kilometres I was mostly on my own for the entire race. I hope the level of competition will improve at the Soweto Marathon next month (07 November),” says Moyo.

Mark Ouma for the IAAF

LEADING RESULTS -
All athletes are South African unless otherwise mentioned