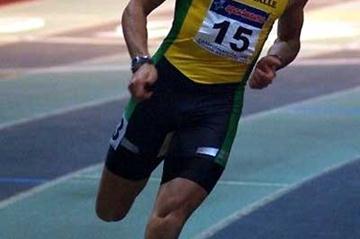 The Italian Indoor Championships held in Genova this weekend (23/24 Feb) produced a major upset in the men’s Long Jump where Andrew Howe, reigning World silver medallist and European champion was beaten by surprising Ferdinando Iucolano who leapt to 7.83m.

Howe, who is concentrating on peaking for the Olympic Games in Beijing, did not jump better than 7.71m and announced that he will not take part in the World Indoor Championships in Valencia.

Genova marked the end of a four-year winning streak at italian level for Howe. The last time Howe was beaten by an Italian was in 2004 when Nicola Trentin beat him in June 2004 during the National Club Championships.

Iucolano, a clubmate of Andrew Howe at the Aeronautica military team, took a well-deserved title with a leap of 7.83, three cm off his seasonal best.

Howe, who went to California in January to train at the UCLA University, was not worried about the defeat. “I knew that one day it would have happened. I had no speed in the run-up and I was very tired. I have not prepared the indoor season. There is no point in going in going to Valencia.”

“But I know that I have worked hard to be ready for the summer. I decided to take part in these championships to break the monotony during a long period of training. I accept the defeat and I want to congratulate with Iucolano who is my friend. He prepared the indoor season and deserved the win,” concluded Howe.

Rosa, whose preparation was hampered by a minor foot injury during the winter, responded with a national seasonal best of 18.63 to snatch the Italian title in the final round. Both Legnante and Rosa are two major hopes for a world indoor final in Valencia in two weeks.

“It was a good test after a period of hard training. I will spend three weeks in Namibia to prepare the World Cup in Cheboksary and the Olympic Games in Beijing”, said Brugnetti.

Italian outdoor and indoor record holder Fabrizio Donato highlighed a good-quality men’s Triple Jump competition by leaping over the 17 metres barrier with 17.06 in the third round which ranks him sixth in the world seasonal list. Fabrizio Schembri, who tripled to 16.92 this winter, finished second with 16.83 ahead of former world indoor champion Paolo Camossi (16.73).

Italian 400 metres hope Claudio Licciardello confirmed his good form by winning the two-lap race in 46.57 which equalled his Italian under 23 record set at last week’s European Indoor Cup where he finished second behind Johann Wissman.

“I wanted to confirm the result of Moscow. I know that I can run 46.10 if I am pushed. I don’t know if I will run in Valencia because I want to start competing in May to qualify for Beijing”, said Licciardello.

Nineteen-year-old Matteo Galvan, World Youth bronze medallist in the 200 metres in Marrakesh 2005, finished second in 47.10 in his first ever 400 metres indoor race showing that he could have a bright future over this distance in the years to come.

Silvia Weissteiner, european indoor bronze medallist in the 3000 metres, broke away from italian 3000 steeplechase record holder Elena Romagnolo with two laps to go to win the 3000 metres title in 8:57.61. Romagnolo set the qualifying standard for Valencia but she told after the race that she has still to take a decision about her participation in Valencia or at the World Cross Country Championships in Edinburgh.

“I trained very hard to be ready for Valencia, so I was tired. The most important thing was to win today”, said Weissteiner.

Weissteiner’s training partner Christian Obrist came to Genova directly from Stockholm where he set the Italian indoor record in the 1000 metres with 2:18.58 on Thursday to take the 1500 metres in 3:42.41.

Elisa Rigaudo took the national indoor title in the 3 km walking race in 12:10.23 “I decided to train at home to prepare the season and not to go at altitude. I will make my debut in the IAAF Walking Challenge in Rio Major”, said Rigaudo.

Micol Cattaneo, who improved her lifetime best in the women’s 60 Hurdles to 8.05sec during the Italy-Finland international match in Ancona had set the previous Italian indoor record of 8.14.
Vincenza Calì, former World Junior fourth placer in 2002 in the 200 metres, came back from years of injuries to win the women’s 60 metres with 7.34, a new PB set twice in the semifinal and the final, but it was not not enough to secure her berth for Valencia.

A squad of 20 athletes will represent at the World Indoor Championships. After Andrew Howe’s decision to pull out of Valencia, the major Italian hopes are carried by Simone Collio, and Antonietta Di Martino.

Collio recently equalled Pierfrancesco Pavoni’ s long-standing Italian Indoor record in the men’s 60 metres with 6.55 in Valencia, which ranks him third in world seasonal list, while World High Jump silver medallist Di Martino, was the winner at the GE Galan in Stockholm with 1.97m. Both Di Martino and Collio skipped the National Championships to prepare the World Indoor Championships.