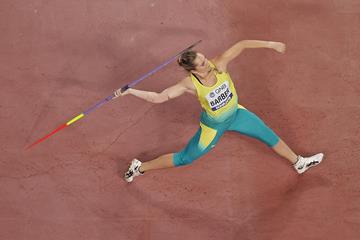 With competitions on hold, flexibility is key as athletes continue to pursue their 2020 ambitions

Gold medallists, at least of the track and field variety, don’t grow on trees in Australia. When Kelsey-Lee Barber produced a final-round stunner in the women’s javelin in Doha last October to jump from fourth to first, she replaced Sally Pearson as Australia’s only reigning world champion.

Like all other athletes around the world, Barber finds herself suddenly in a world full of uncertainties. The Covid-19 pandemic throws into chaos the carefully-laid plans most athletes make and follow towards an Olympic Games. Worse, they can’t make new plans until the scope and duration of the crisis becomes clearer. And no-one can tell them when that will be.

What to do? For Barber, it’s simple. Stick to what you know until you know more.

“Our plan is our plan leading into the Olympic Games, until we’re told otherwise,” Barber says.

Barber was to resume competition at the World Athletics Continental Tour Queensland Track Classic (20 March). The meeting was postponed, as was her next planned outing at her national championships. Further, all competition was suspended until May, at least, and early Wanda Diamond League meetings were off.

“We’re working towards an Olympics Games,” says Barber. “What is good is that we still have that same end-goal, but circumstances mean that the preparation and the lead-up have to change. We’ve got to re-assess, shift some things around. Instead of competing, we go back into training and when, and if, those competitions come back on-stream we pick them up again.”

Control what you can control. In sport we are taught to focus on what is within our control and to be comfortable with uncertainty. Right now, that means look after yourself and one another. Train if you can, but also take the time to be with loved ones. Sport is a small part of this big world. 📸 @nancyjphotography . . . #asics #javelinthrow #thatjavelingirl #sport #trackandfield #covid_19

Canberra-based Barber says Australia is still in a relatively good position. Throwers generally need access to more facilities than track athletes, but Barber says she has had no issues there yet.

“Everything is open (though) were being more vigilant in terms of contact with other people, observing the social separation distances. If our gym gets shut down, that would be one area we would have to re-consider. With things like that, as long as you know what you’re trying to achieve you can work around it.”

Even something as big as a postponed or cancelled Olympic Games.

“The Olympics are big, but my career is about more than the Olympic Games. I have other goals and other things I want to achieve,” Barber says.

“At times we have to step back and focus on the things that matter.”

Denny: ‘I rely on athletics to make money’

Discus thrower Matt Denny has had a full domestic season, and competitions in New Zealand as well, but he was still stunned by the turn of events which saw the remainder of the domestic season curtailed.

“For the first few days I was stunned. I was looking forward to Brisbane which was to be my first competition at home since the (Gold Coast) Commonwealth Games. There was going to be a lot of family and friends there. I wanted to pop out an Olympic qualifier.

“It was a bit of a shock. (Athletes) hate uncertainty, not knowing what will happen, or what won’t be happening.”

Rearranging training camps and competition, along with reduced earning opportunities, are some of the consequences.

“We’d made plans, when we were competing, when we’re peaking, how the season could look. And the competitions where I could make money. I rely on athletics to make money.”

Denny had originally planned to go to Italy early in May and base in Europe for the rest of the season.

“Now it’s all shut down and we’re in a holding pattern.

“It’s frustrating trying to prepare when you don’t know when the season starts, or what notice you’ll get when competition resumes, whether you’ll go straight into Tokyo, or how the qualifying system will be affected.

“But you just have to control the controllables and decide once we know,” Denny says.

Brandon Starc, men’s high jump Diamond Race winner in 2018 and sixth in the world championships last year says he likes certainty, but athletes need to be able to adjust, too.

As the plan Starc and his coach, Alex Stewart, had is being ripped up by the global pandemic, flexibility is paramount right now.

“Competitions are the biggest issue,” says Starc. “The Queensland Track Classic (a World Athletics Continental Tour status meeting) was meant to be happening last night (20 March), with good competition and good points.” It was postponed, the Australian championships likewise.

Starc’s first European competition was set down for 28 May (the Golden Gala in Naples), but that is now uncertain. For the first time in more than six years he could be spending the winter in Australia, which would mean going straight in to Tokyo off training camps and whatever competition can be arranged.

“I don’t like planning everything out to the last detail because you’ve got to be able to adjust, for injury, for example, or meetings being cancelled.”

Starc has no problem accessing facilities, training for the most part at the New South Wales Institute of Sport campus at Homebush, site of the Sydney 2000 Olympics.

Starc says he is coping well mentally with the disruption, is training well. Full steam ahead, then, even if the destination remains shrouded in fog.

“We were going to Flagstaff in April for a training camp, but that’s been cancelled now,” says Camille Buscomb. “Then it was on to Europe for races, and St Moritz for another camp in June. But we just don’t know that far forward.”

So, Buscomb is at home, in Cambridge on New Zealand’s north island. “I can train freely, but I’m unable to train with the (Melbourne Track Club) group.” She has access to all the facilities she needs, has one High Performance Centre nearby and can travel to Auckland to access the one there.

“It’s more the specific planning that we can’t do,” Buscomb says. “I can continue training. I have the Olympic qualifiers, so I don’t have to be looking for races when there aren’t any.”

As for Tokyo, timing is certain until she knows otherwise. “I’m assuming I’ll be competing in August. (Not knowing for certain is) a different type of obstacle. Our sport is about managing challenges.”

For the present, Buscomb is working to the set dates. “The end of July, start of August, is what I’m training towards.

“I’m trying not to think too far forward. I’m just thinking of training well, staying positive, and doing the things I can do each day.”

In some ways, the curtailment of the Australian domestic season came at a good time for Catriona Bisset. After a break-through season last year, she was coming back from the injury which wrecked her world championships campaign.

“I feel like I was rushing the domestic season anyway, training through races. I reached a good level of form and needed to get the season over and done.”

Bisset can get back to base training. A planned altitude camp at Albuquerque has been cancelled, but “I’ve got an altitude tent,’ she says, “I can get back to my aerobic base, I can self-isolate at altitude.”

Bisset has full access to all her training facilities as she trains in a small squad under veteran coach, Peter Fortune, who guided Cathy Freeman to an Olympic gold medal.

Bisset has the automatic Olympic qualifying standard and remains optimistic the Games will go ahead. Even if they do not, she says, post-Olympic competition probably will.

“It’s tricky if we don’t have races leading into the Olympics. Maybe lots of athletes won’t be in their best shape possible.

“Whether the Olympics go ahead or not, I am planning on racing then.

“I love training, love running. My aims have never been solely championships, but to race and run PBs.

“As long as I’m racing, training well, and have my group to train with, I’m happy.”

Hall: ‘I’m trying not to waste energy worrying about things. No one has the answers yet’

Linden Hall says the day following the indefinite postponement of the Australian championships was hard.

“The Saturday morning session, it was very morbid. For a lot of the group the nationals was their Olympics: they’re thinking, ‘why am I even here’.”

Hall has gone back to the training block which would have followed the national titles in any case, but a planned altitude stint in Albuquerque has been cancelled, along with competitions following that. She’s not sure what will replace them yet.

“I’m trying not to waste energy worrying about things. No-one has the answers yet. It’s not like they’re holding back on anything.”

Hall says Australian athletes are luckier than many of their European counterparts. They have a full domestic season under their belts, which for Hall culminated with a PB 800 behind Georgia Griffith and Catriona Bisset, while the northern hemisphere has come out of winter.

It’s back to some base type training, revise plans once the situation becomes clearer and, says Hall, “hold on to the hope some things will come good.”