On Camp with Ashton Eaton

“This is a great opportunity for you to see how I work, and to see what it takes to be a professional athlete competing at the top level.

“I don’t think we have all the answers, but I do think that we’re successful for a reason. So pay attention.”

With that, Ashton Eaton pokes his head from under the bowels of Hayward Field’s main grandstand and looks out on the miserable March weather in Eugene, Oregon.

The 28-year-old looks back at Werner Visser, Maribel Caicedo, Khalifa St Fort and Niklas Kaul, the four teenage athletes he chose to join him to train in the town where he lives. It is the first morning of On Camp with Ashton Eaton, and the star youth athletes, selected by Eaton following their outstanding performances at the 2015 World Youth Championships, Cali, are a little overawed.

The day begins with three laps of the track. The rain falls sideways, not conditions South African discus thrower Visser, Ecuadorian sprint hurdler Caicedo and Trinidadian sprinter St Fort are used to. But this is a once in a lifetime opportunity, so out they go, following in the wake of the man who four years earlier set his first decathlon world record on the very same track.

Once warmed up, Eaton moves straight into long jump approach work. Two days earlier, he had competed at the national championships, finishing sixth. He has only two days in Eugene to tune up ahead of the World Indoor Championships in Portland, where he bids to win his third consecutive heptathlon title. If the young athletes didn’t know already, they quickly learn that this training camp is the real deal.

They watch as Eaton goes through his drills, diligently watched over by his coach, Harry Marra. It is a relationship built on understanding and trust.

“Quite a lot of the time, I’ll already know what I’ve done wrong before Coach tells me,” Eaton says. “He acts like my conscience.”

After long jump, Eaton runs through pole vault approaches. Again, this is not just for show. The pole vault is an area Eaton has enjoyed gains in, improving his indoor personal best to 5.40m in February this year – when breaking the heptathlon world record in 2012 (yes, he holds that one as well) he notched a mark of 5.20m.

It’s an intense first morning that the young athletes use to acclimatise to Hayward Field’s Spartan but functional indoor set up. “My coach would love to train here,” Visser says. “Track, weight area and throwing circle all there when you need them, and all inside.”

It’s true: everything is on hand, yet there is nothing remarkable about the surroundings, nothing to suggest that the world’s finest athlete resides there. And that is just the point, in Marra’s eyes.

“Way back to when I worked with the USA Decathlon team we would have kids come along to see how we trained,” he says. “And they’d see them warming up the same, tying their shoes the same, and they’d realise, ‘Hey, they’re just like me’.”

Just as serious as training is down time. This is where Eaton and the young athletes can unwind. The morning session is wrapped up with lunch at Agate Alley Bistro, a favourite student haunt a stone’s throw from Hayward. Later in the evening, Eaton takes the young athletes to the arcade for a few games of Lazer Tag – “a light dynamic exercise” – before winding things up at the bowling alley, which Visser quickly learns requires a different technique to throwing discus.

The following morning starts again at 10am. As with the previous day, the relentless rain forces things indoors, and once again, things are nothing short of serious. The athletes go through a set of medicine ball drills alongside Eaton. Presiding over matters is Marra, who clutches a piece of paper on which he has the day’s exercises scribbled down.

Sometimes practice gets serious.On Day 2 of On Camp with Ashton Eaton, Niklas Kaul and Werner Visser took on the champ in a quick shot put competition.The winner..?

Immediately after this comes shot put, and a chance for the boys to throw alongside Eaton. Each effort is accompanied by technical feedback from those watching on. Visser, still reeling from his bowling struggles the previous evening, takes his time to find his rhythm, but when he does unleashes a monster effort that goes down as the best of the day.

Finally it’s time for block drills. Eaton tells St Fort and Caicedo his preferred way of completing the repeats, explaining the physics and experience behind his methods. There is no hold up in intensity as the three, joined by Kaul, the world youth decathlon champion in Cali, complete the drills to the sound of Marra’s whistle.

There was no let up on Day 2 of On Camp with Ashton Eaton as the athletes were put through their paces on Hayward Field's indoor straightaway.

After training there’s a chance to refuel at the canteen on the University of Oregon campus. Just as the day before, Eaton is fascinated to know what makes the young athletes tick. What do they like about being an athlete? Do they ever get nervous? Are there ever days where they just want to stay in bed? As much as On Camp has been a chance for young to learn from old, it has been an opportunity for Eaton to remind himself of his own journey from raw teenager to senior world beater. He is not embarrassed to admit that: “I also want to learn from you. There are some things that you have that I want to have.”

There’s just time for the young athletes to be given a tour of the University of Oregon’s multi-million dollar Football Performance Center, which sits adjacent to the Autzen Stadium, where the Ducks play their home games. All tinted glass and polished wood, there is no comparison to the more austere facility they have just trained in, but it affirms the impression that the young athletes had already developed of the university’s athletic programme. It’s a facility designed to turn promising young athletes into stars, and it hammers home that for these young champions, the next few years are crucial if they are to push on to the next level.

But aside from the aspirations of the individual, Marra, who also joins the tour to poke around some of the offices that he wouldn’t normally stray to, is adamant that On Camp is the sort of project that can help revive track and field’s fortunes.

“It’s all about the kids”, he says. “This sort of project is what will save the sport. The youths trainings with the elite athletes is absolutely crucial. It won’t happen overnight, but this is where it’s got to start.” 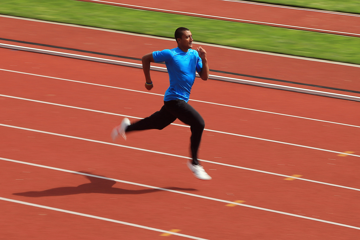