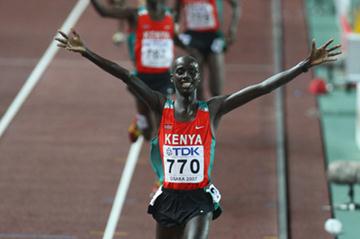 A Kenyan athlete changing his name? So what’s new? But Brimin Kipruto is not another Stephen Cherono – unless you refer to the fact that the former has just succeeded the latter as World champion in the men’s 3000m Steeplechase.

Kipruto played the leading role in upholding a glorious Kenyan tradition by leading his country to a sweep of the medals here tonight. Unlike Cherono, who had changed his name to Saif Saeed Shaheen, switching nationality to Qatar, Kipruto’s name was changed by accident.

Chosen for the Kenya team for the 2001 World Youth Championships, in Debrecen, Hungary, Firmin Kipruto needed a passport. But when he was applying for a birth certificate to obtain his first passport, Firmin was mistakenly transcribed into Brimin by a clerk.

“I saw what was entered in the computer, so I thought I had to stay with what they wrote,” Kipruto said. “They did it by mistake.” But there is no mistaking Kipruto’s talent. He has a fine collection of international championship medals from his short career, although his victory last night was his first gold.

Runner-up in Debrecen (2000m Steeplechase), he took the bronze medal in the 2004 World Junior Championships in Grosseto, Italy, and silver in the Olympic Games, in Athens, that year. Two years ago, at the last World Championships, in Helsinki, he had to settle for bronze behind Shaheen and Ezekiel Kemboi, his compatriot and Olympic champion.

The Steeplechase - the world’s ‘most, most, most difficult race’

Here it was finally Kipruto’s turn. In an obvious and admitted team effort, the three Kenyans worked together to extend an extraordinary sequence of national success. Kenya have won gold and silver in the event at the last five Olympic Games and did the same in every World Championships between 1993 and 1999. Since then they had won five of the nine medals competed for between 2001 and 2005.

But this was their first World Championships medal sweep since 1997. “We will do a lot of training and you will see in Beijing (2008 Olympics) that again we are going to take positions 1-2-3,” Kemboi said. “We planned well and did all we expected,” Richard Matelong, who finished third behind Kipruto and Kemboi, said. “I was very happy to follow my colleagues who have been there before.”

Took up the event in primary school

The Steeplechase, which Kemboi described as “the most, most, most difficult race in the world,” was something that Kipruto took to as a young child. In his final year at primary school he qualified for the national primary school championships in both 1500 metres and Steeplechase.

For four years in secondary school, he reached nationals each year in both events, winning the 1500m twice and the Steeplechase three times. From 1999 to 2003, he was a regular participant in the school holiday youth training camp run by Colm O’Connell, at St. Patrick’s High School, Iten.

In 2007 Kipruto ran indoors for the first time - three European races, most notably a 4:58.76 for 2000m in Birmingham behind Kenenisa Bekele’s World best 4:49.99. Outdoors he recorded a solid 8:06.98 in Athens for 3rd behind Kemboi and Matelong, and he finished in his customary second place behind Kemboi in the Kenyan World Championships trials.