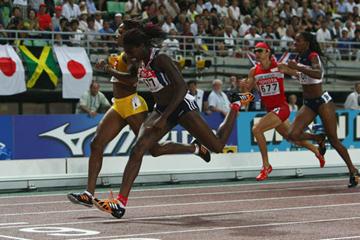 Six thousand miles away from the heat of Osaka, the excitement was growing in a house in the vicinity of Stratford, East London, UK. It was almost 1.50pm on Wednesday (29) and crammed around the television were mum, dad and six of their children.

Their seventh child was missing. She was the reason they had broken their day for the afternoon viewing. The show? Live athletics. The subject matter? Christine Ohuruogu. The occasion? The greatest one minute of their lives.

Or, to be precise, the greatest 49.61 seconds because their daughter is the new 400m heroine after a triumph of stunning proportions in those brief moments at these 11th IAAF World Championships in Athletics.

“I am so happy for everyone,” said Ohuruogu, 23, the Commonwealth Games champion, as she digested her latest triumph. “I know they were all watching back at home and it must have been amazing for them. I have so much support from my family, and it was wonderful to achieve it.”

Ohuruogu was running only her seventh race of the season, but it did not show. It was one of the best, most dramatic clashes in the opening five days of these Championships because it was what we all watch this sport for.

It was a guessing game of who would take gold.

With 100m to go, it looked like it was going the way of Novlene Williams, of Jamaica, who turned into the home straight ahead. She had been the quickest woman in the heats, and the outcome seemed inevitable in the final. But first, Britain’s Nicola Sanders came darting through and then, with 10m left, Ohuruogu dashed between them both to snatch victory in a personal best time.

Sanders, the European Indoor champion from Birmingham, England, last March, was second with in 49.65, in a personal best time, with Williams third in 49.66. It was that close.

Gold belonged to Ohuruogu, an athlete of Nigerian origins whose victory last night did not just establish her a small place in the British record books. It created a whole, fresh chapter.

You have to go back to the 4th IAAF World Championships in Athletics in Stuttgart in 1993 for the last time that Britain gained a one-two in an event, when Colin Jackson beat Tony Jarrett in the 110m Hurdles.

Not since those same Championships has Britain won a woman’s track gold medal, Ohuruogu being the first to follow Sally Gunnell’s 400m hurdles glory from Stuttgart.

But most significantly, her success here in Japan was the first time a British woman has won a global 400m title.

“I am really happy to have achieved those things,” said Ohuruogu. “Everything I have prepared for this season has been towards this vision of being at the World Championships but you do not know what will happen.”

She is very much a family girl. She is from a religious family, she shares a bedroom with one of her sisters and around the home there is no star status. Never mind that she might have a World Championship gold medallist, there are no exceptions made for the star of the household.

It is one of the reasons why Ohuruogu has been able to focus on her athletics dream and now she has her mind on more success.

When the 3rd IAAF World Championships in Athletics took place in Tokyo in 1991, the last time they were in Japan, Britain's men won the final gold medal with victory in the 4 x 400m relay.

It is the women’s turn this time when Ohuruogu and Sanders combine, probably with Lee McConnell and Tasha Danvers-Smith, to look for another helping of glory.

“Being a gold medallist is amazing,” she said, preparing to call the family back home who had just been treated to an afternoon of television in England which they will never forget.

Richard Lewis for the IAAF