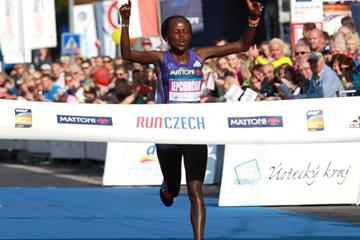 World half marathon champion Peres Jepchirchir will return to the Ottawa 10K on Saturday 28 May, the organisers of the annual Tamarack Ottawa Race Weekend have announced.

“The Ottawa 10K is a great and well-organised race,” said the 22-year-old Kenyan, who won her world title in Cardiff just two weeks ago. "When I ran it last year, I did not feel any pain, stitches or any other problems that I would normally encounter in other races. I really enjoyed it."

She finished second in last year’s Ottawa 10K in what was then a personal best of 31:18, behind her compatriot Gladys Cherono who won in a course record of 30:56.

“I have no idea why it feels so great running in Ottawa,” she added, “but I think there is something magical about the weather there.

“Last year, I made the mistake of picking the water at about 8km and that is when Cherono seized the opportunity to open a gap on me. She later advised me against doing that in my future races and that for races that are 10km or shorter, one ought to take enough fluids before the race so that there would be no need to stop at the water stations.

“I have been improving on my personal best times since 2014,” added Jepchirchir, who is still coming to terms with being refered to as a world champion. "The time I ran in Ottawa 10K last year, which was 31:18, became my personal best time until I ran the Prague Grand Prix and lowered it further to 30:55. I hope to lower that again when I go back to Ottawa in May.

“I had prepared very well for the world half marathon race and I felt that my body was in good shape. But I was not confident about winning it because others in the field had faster personal best times and better experiences in major competitions. Cynthia Limo, particularly, had beaten me at the RAK half marathon only in February, where she had won and I was fourth.

“As the race (in Cardiff) progressed, the pace worked to my advantage. We crossed 10km in 32 minutes and I remembered my coach’s observations during my training that he thought my body responds well in paces that are constant. When a race starts out gradually and then remains constant, it favours me. This gave me hope as we ran the last half of the race."

Jepchirchir has no siblings who are runners of any renown but she believes there is a natural talent that runs in the family.

“My grandmother comes from the same family where the legendary Kipchoge Keino comes from," she said. "I think talent alone without hard work does not yield anything when it comes to running. Perhaps some of my younger siblings will now start training hard after seeing my success and knowing that it is possible for them to succeed too."

After the Ottawa 10K, Jepchirchir will be aiming to make the Kenyan team in the 10,000m at the Rio 2016 Olympic Games this summer.