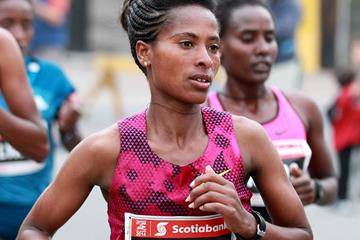 Ethiopians aiming to dominate the Ottawa Marathon once more

Waving flags, ear-piercing ululations and other celebratory expressions have greeted the Ethiopian winners of the Scotiabank Ottawa Marathon these past several years as their supporters have come out en masse for the IAAF Gold Label Road Race.

Ethiopian women have won the past seven editions of the Ottawa Marathon, while their male compatriots have built up a four-year streak. That dominance could well continue at this year’s race on 28 May.

“There are so many things I like about Canada but simply the city of Ottawa is so beautiful with amazing people,” says defending champion Koren Jelela. “What I remember most about Ottawa last year is that the weather was so heavy – it was windy and cloudy – and we Ethiopians finished 1-2-3 in the women’s race.

“But the support of Ethiopians in the crowd, I remember, made me so happy and proud that we all have got these results and made those other people happy. I was so sure all the hard work was worth it.”

“They have a great respect for Ottawa,” Jelela says of her training partners. “Also for Toronto. It was won two times by our team member, Shure Demise, so we all work hard to get the best result in Canada.”

At the moment Jelela is running roughly 180 kilometres each week at altitudes of between 2500m and 2800m with the intention of retaining her Ottawa title. Victory isn’t a foregone conclusion, however.

A year ago she easily handled the competition, which included 2015 winner Aberu Mekuria, stretching her winning margin to nearly three minutes by the finish. Now Mekuria is also returning with revenge in mind.

The men’s race will feature several Ethiopian stars including Seboka Tola Dibaba marking his second visit to Canada in seven months after finishing second at the Scotiabank Toronto Waterfront Marathon last October. With a personal best of 2:06:17 from the 2012 Dubai Marathon, he will be one to watch. He is joined by compatriot Sisay Jisa, who has a PB of 2:06:27.

Jisa has the nickname ‘Sherube' for his unique hairstyle – he races with his hair in cornrows. Earlier this year he finished fourth in Dubai in 2:08:09 and Ottawa will mark his first race in Canada.

Adugna Takele will also be making the journey from Ethiopia this year. He finished second at the 2013 Ottawa 10km and then moved up to the marathon, setting a PB of 2:08:31 in Frankfurt in 2014.

Not only do Ethiopian runners have a grip on the podium, but both the course record-holders are from the East African nation.

In 2014, Yemane Tsegay emerged victorious in the men’s race while Tigist Tufa took the women’s. Tsegay also set a still-standing Canadian all-comers’ record of 2:06:54 that day and earned a bonus of a Hyundai Santa Fe SUV. A year later he took the silver medal at the IAAF World Championships in Beijing.

He isn’t the only Ethiopian to excel beyond the Ottawa Marathon.

After setting a course record of 2:24:31 in 2014, Tufa ran a PB of 2:21:52 to win the Shanghai Marathon later that year. But it was her surprise victory at the 2015 London Marathon that really caught the world’s attention.

“I had mixed feelings thinking of the 2014 Ottawa race,” said Tufa, who finished eighth at the recent London Marathon in 2:25:52. “I was so happy being the champion. It was my first IAAF Gold Label marathon win and I will always remember as it is my first happiness.”

Tufa says winning Ottawa made it easier for her to get into other IAAF Gold Label races, including London. She was also selected to the Ethiopian team for the Rio 2016 Olympic Games.

The field assembled this year by race director Manny Rodriguez is worthy of the IAAF Gold Label and one thing is certain: the Ethiopians will come expecting to dominate. As Jelela says, there is national pride.

“I hope to run 2:23 as it is going to be my best time there and, yes, I expect we will finish 1-2-3 and we will celebrate,” said Tufa. “The victory is very important to me. If I win, I will be a three-time winner in Canada, which has a big name.”