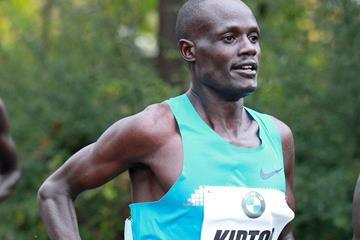 Two months after legendary Ethiopian Kenenisa Bekele announced that he will be making his 26.2 mile debut at the Schneider Electric Marathon de Paris, the rest of the elite fields have been revealed for the IAAF Gold Label Road Race on 6 April.

Aside from the multiple world record-holder, there will be another Ethiopian Bekele competing in the French capital. Azmeraw Bekele smashed his marathon personal best by more than three minutes when finishing fifth in Dubai this year with 2:07:12.

But another Ethiopian, Abdullah Shami, will have the honour of being the fastest man on the start-line. Winner of the Hamburg Marathon two years ago, Shami recorded two sub-2:06 marathons in 2012, setting his personal best of 2:05:42 in Dubai that year.

Getachew Negari Terfa is one of the most consistent performers in the field. Undefeated in 2013, the Ethiopian won in Xiamen with a personal best of 2:07:32 and followed it two months later with a 2:07:56 victory in Rome.

Limenih Getachew will be keen to secure his first marathon win, having finished on the podium in his first three marathons. The 23-year-old Ethiopian has a best of 2:07:35 set in Hamburg last year.

Gezahagn Girma is another Ethiopian with a sub-2:08 best who will be competing in Paris for the first time. The former Marrakech Marathon winner has a PB of 2:07:41.

The men’s race at the past three editions of the Paris Marathon has been won by Kenyan athletes and Mark Kiptoo will be looking to continue that tradition. The 37-year-old will be contesting just his second marathon to date after his impressive 2:06:16 debut in Frankfurt last year.

Having won in Rome two years ago with a PB of 2:08:04, Kenya’s Luka Kanda will be looking for victory in another European capital city on 6 April. 21-year-old compatriot Gideon Kipketer is hoping to rebound from his DNF at the Tokyo Marathon last month, while Mike Kigen warmed up for the race with a 1:00:44 half-marathon clocking in Paris earlier this month.

Simon Munyutu is the top French entrant and set his PB of 2:09:24 in this race six years ago. Fellow Olympian and World Championships representative Grigoriy Andreyev of Russia is also entered.

Bekele won’t be the only debutant in Paris. Ethiopia’s Mule Wasihun would have gained a lot of confidence from his recent 1:00:08 victory at the Paris Half Marathon, beating the likes of Azmeraw Bekele and Mike Kigen. Behailu Ketema, who finished fifth in that race in 1:00:58, will also be contesting his first 26.2-mile race on 6 April.

Kenya’s Valentine Kipketer has taken significant chunks off her personal best in each of her completed marathons to date. After a 2:28:02 debut in Hamburg two years ago, she won in Mumbai last year with 2:24:33 and rebounded from a DNF at the IAAF World Championships with a 2:23:02 victory in Amsterdam.

Kipketer’s compatriot Flomena Cheyech also won two marathons in 2013. Her best result was a 2:24:34 lifetime best to triumph in Vienna.

Meskerem Assefa leads the Ethiopian entrants. The former middle-distance specialist competed in the 1500m at the 2011 IAAF World Championships and 2012 Olympics, but has since switched to the roads and clocked 2:25:17 in her first marathon.

Fellow Ethiopian ZemZem Ahmed also represented her country at the World Championships and Olympics. The former steeplechaser has a PB of 2:27:12.

Martha Komu won the Paris Marathon back in 2008 with a PB of 2:25:33 and went on to represent Kenya later that year at the Beijing Olympics, finishing fifth. Now running for France, the 30-year-old is the only former winner competing at the 2014 edition.

Kenya’s France-based Sarah Chepchirchir will be making her marathon debut in Paris. With a 1:08:07 half-marathon PB, she could spring a surprise.