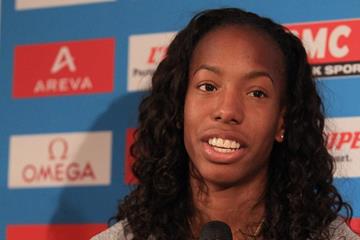 Brigetta Barrett is an accomplished singer and so it’s likely that she knows Alice Cooper’s 70s rock anthem ‘Schools Out’ off by heart. It’s probably a tune she and the Jamaican sprinter Shelly-Ann Fraser-Pryce have been mentally humming since the start of the summer.

The London 2012 Olympic Games High Jump silver medallist and 100m champion have both finished their academic studies, at least for the moment, and that has meant they have been able to bring fresh minds and bodies to their summer campaigns.

“It feels so good to be graduated and, especially for me, it’s a case of balancing my training, taking care of my body, and then I have to go to do community service, and I love doing community service. I love talking at high schools and little kids, it’s so much fun,” said Barrett at the traditional press conference ahead of Saturday’s IAAF Diamond League meeting in Paris.

“It’s so much better to not be at school and not have to wake up early, to sleep in. After the high of (the Olympics in) London, I didn’t get much of a break. I didn’t get the chance to reset mentally or physically and it was so difficult. I was showing up at meets and was not able to focus at all, it was really hard.

The relief at no longer being burdened by academic expectations showed at the US Championships where she won with a personal best and 2013 world-leading clearance at 2.04m.

“It’s now different because it (jumping 2.04m) is more freeing. The World record has always been my goal. In my mind I have many mile stones.

“One was the Olympics and learning how to perform well on such a big stage, then it is the American record, so being able to jump 2.04m way earlier than I expected is very freeing for me because in my mind there are no limitations any more. If I don’t jump well, I know now it’s not a mistake in the training, it’s just me doubting or having fear.

Barrett now plans to move to Los Angeles in the near future as her coach is also moving there but, being closer to Hollywood and taking into consideration her abilities and academic background, she confessed that she plans to take advantage of her new location and take citing and singing classes there.

Fraser-Pryce faced similar pressures, even if it didn’t show as she racked up an impressive set of honours, including defending her Olympic 100m title in London last summer.

“I was trying to balance both school and track, doing work and tests and it was a bit tiring at times. I was having to do my time on assignments and in the classroom, but this year I finally have the opportunity just to focus on what I want. Mentally it has been rewarding and physically as well. I haven’t had to miss any meets because I have exams.

“I used to leave early in the morning, I was a full time student and I had classes at 9am, sometimes I wouldn’t finish my practice session in the morning, which would sometimes be stretching and all of that. Now I don’t miss training, make sure my flexibility is right, make sure I’m warmed up.

“I grew up in an inner city and my mother was poor. I know what that felt like, to be in that situation. I know that I’m able to work hard and achieve what I want. It gives me that sense of pride to keep that going. I believe that the moment I start working, I’ll lose everything. I take great pride in the fact that I was the first person from my family to get a degree.”

Mainly thought of prior to last year as predominantly a 100m specialist, Fraser-Pryce surprised many by taking the 200m silver medal in London in a personal best of 22.09 and she’s positioning herself as a threat to the do the sprint double at the World Championships, a feat only previously achieved by the former East Germans Silke Gladisch and Katrin Krabbe in 1987 and 1991.

“Last year was a bit of testing the water for me, where I did the 100m and 200m at a major championships, which was rewarding. Now that I look back at it, I can take a lot from it.

“I’m definitely working more at the 200m. I can be a little off in the 200m because I’m still trying to learn the event. I’m not one of those athletes who will have a burst of energy to the line. I attack it from the start. The more 200s I do, the more I’ll know whether this works or that works."

However, Fraser-Pryce admitted that she has to rely on guidance from her coach Stephen Francis for such information.

“I don’t look at other people’s races. Sometimes I don’t even look for myself. I hate watching my races, I don’t watch them back when my coach says ‘Shelly, you did this or you did that.’ I’m not a track junkie who needs to sit up and wait on somebody else’s results or races.

“The less pressure is better for me. If I don’t know then it’s easier for me to compete well.

Her comments raised the question, does every success add a little more weight on her shoulders?

“Sometimes going into a major championships I say to myself: ‘you did that in 2012, can I do it in 2013?’ I try to fool my mind, trick my mind and I say to myself: ‘This is something I’ve never had, I want it. So I work hard to try to accomplish it.”

This year, the star performers in the 400m have so far been Grenada’s 2012 Olympic champion Kirani James and a rejuvenated LaShawn Merritt and the pair should have a battle royal over one lap of the Stade de France on Saturday.

“I’ve been training hard and smart. I had a great national trials,” said Merritt.

“I’ve a new coach this year, I now work with Loren Seagrave in Florida, so my training is a little bit different. I do less weight training so maybe I’m looking a little smaller than in the past. I’m not lifting heavy weights and I’m doing some over-distance work.

“When I race him (Kirani James) I still look at it as eight men in the field because you never know what’s going to happen. There are eight grown men in the line up and it’s their job to go out and perform well.

“But when we happen to be in the lane next to each other, it brings out the best in us and we are the top two, fastest quarter-milers in the world right now.

“Kirani James will be at the start on Saturday night, but it doesn’t affect the way I run, neither my motivation. I’m not focused on him or on anybody else. I do my race, I try to execute as well as I planned. I hope it's a good race to set up my preparation before Moscow.”

James also believes that while Jeremy Wariner’s stadium record of 43.86 from 2008 might be just a little out of reach at this stage of the season, the capacity crowd should be well entertained.

“Good things can happen but I can’t predict it,” said the lugubrious James.

Nevertheless, win, lose or dead-heat, James is enjoying his trip to the French capital and made his hosts very happy with his comments.

“First thing, Eiffel Tower,” said James, looking out of the window of the press conference room at the famous Parisian monument. “Great sights and great food, I’ll probably be back here on vacation.”

“This is my third competition in Paris. I love this meeting. It’s one of my favourites after Lausanne and Zurich, and that’s because I’ve lived in Switzerland for the last three years. I love the stadium and the atmosphere. It’s going to be a good test before Moscow,” said Adams.

“I’m very pleased with my season so far. I had a rough start, I sprained my ankle. But now everything is okay, I’m on track. I’m in good shape, and we are at half way to the Worlds in Moscow,” she added, taking a winning streak of 35 contests stretching back to August 2010 into tomorrow’s competition.