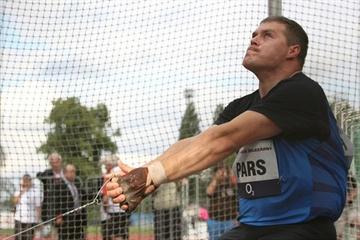 Krisztian Pars' victory over Koji Murofushi and a Japanese national record in the women’s 4x100m Relay were among the highlights of the Seiko Golden Grand Prix in Kawasaki, Japan, on Sunday (8).

Warm but windy conditions – sprints were run into the wind – affected the performances in the dashes at this IAAF World Challenge meeting but that didn’t keep the quartet of Saori Kitakaze (name means north wind), Momoko Takahashi, Chisato Fukushima and Kana Ichikawa from breaking the national record with a 43.39 peformance, improving the 43.58 set in Osaka in 2009.  Incidentally all revenues from ticket sales will be donated to victims of Japan's recent earthquake and tsunami.

Australia led after the first leg with Sally Pearson’s superb run and maintained their lead through the midway point. However, Japan took over the lead with Fukushima, national record holder at both 100m and 200m, on the third leg and won comfortably setting the national record in the process.

Australia was second with 43.69, also under the World Championships qualifying standard. China was disqualified after a false start.

The meet also featured the first competition in the IAAF Hammer Throw Challenge, which was won by Pars of Hungary over the home country favourite Murofushi. Pars threw 79.47m with his first effort, a mark nobody could surpass.

In his first competition of the season Murofushi reached 77.03m in the first round. Both Pars and Murofushi fouled their second attempts, with Murofushi’s throw skimming the net which is quite unusual. Murofushi failed to improve on his third throw (76.66m), but did improve with his fourth to 77.71m.  Pars threw 78.86m in the fourth round, which also would have ultimately won the competition.  Murofushi improved again in the fifth round, reaching 78.10m, but fell well short with his final throw of 75.27m, and thus he had to settle for second place.

In other featured throwing event, the men’s Javelin throw, the hometown hero, Yukifumi Murakami, the World championships bronze medallist, won as expected.  Murakami opened with 82.90m and then threw 82.23m on his second attempt. Stuart Farquhar also threw beyond 80 metres (81.14m) with his second throw, which turn out to be his best for the day. After throwing 82.90m on his third attempt, Murakami passed rounds four and five and after his win was confirmed, passed in the sixth as well. Genki Dean, the world junior silver medalist, was third with 78.90m.

After a 10-hour flight from Doha in the wee hours of Saturday morning, Lolo Jones prevailed in the 100m Hurdles, winning in 12.92. Running in lane four, she took the lead by the second hurdle and won easily over Yvett Lewis (13.07), who also competed in Doha.

In the men’s 400m Hurdles, Japan’s Dai Tamesue started with very ambitious pace, perhaps hoping for sub-49 clocking. He led until he eighth hurdle but then slowed dramatically and faded to fifth. Brendan Cole of Australia took the win in 49.60, while World Junior bronze medallist Takatoshi Abe was second in 50.17.

In women’s 100m, another featured event, Chisato Fukushima, who ran the third leg of the relay hour and 45 minutes earlier, started well, but Alexandria Anderson of the USA pulled ahead in the middle part of the race and won comfortably in 11.28. Although Fukushima started to gain on Anderson after 70 metres, Fukushima visibly slowed in the final 10 metres with grimace in her face and finished a disappointing fourth. Apparently she didn’t suffer an injury.

In the men’s 800m Yasuhiro Makino went ahead of the designated pace maker Jozsef Pelikan on the first lap. When both Makino and Pelikan dropped out, Masato Yokota took the lead. Although Yokota was passed by Australians James Kaan and James Gurr before the final bend, Yokota came back strongly to win in 1:46.87.

In the men’s Pole Vault, Daichi Sawano, Japan’s national record holder, cleared both 5.45m and 5.60m on his first attempts to win the competition, but failed three times at the 5.72m World championships ‘A’ standard. After clearing 5.45m, Russian Sergey Kucheryanu failed once at 5.60m and twice at 5.72 and had to settle for second.

Prior to the event, a brief formal ceremony was held in which the sport's response to the recent disasters in Japan, "Run for Japan", was featured. During the ceremony, Murofushi delivered a short but eloquent address to the crowd of more than 11,000, first in Japanese and then in English.

"There are so many things that you have to overcome if you want to be an athlete," Murofushi said. "After wining a gold in the Athens Olympics 2004, I was really looking for better performances. I thought I could do much better in the next season. But because of so much training and throws in the past, my body was not able to take it and I could not compete in the 2005 season. I felt hopeless."

"However by reaching out to fellow athletes, coaches, family, friends, fans and mentors," Murofushi continued, "I was able to enjoy my training even in bad situations and find out about news way of training and throwing and came back with good throws again. With their support I was able to rebuild and make the good energy flow."

"Here in Japan people have lost so much. Homes, lives, loved ones. But by reaching out - to each other, and to our friends around the world - I know that we can move on with strength and courage.Today I am so proud to be part of this event here in Kawasaki. Today the Japan Athletics Federation can stand tall with our friends and fellow athletes from around the world. Today we can show the power of sport: to bring people together, to take on the biggest challenges, and to make good energy flow!"