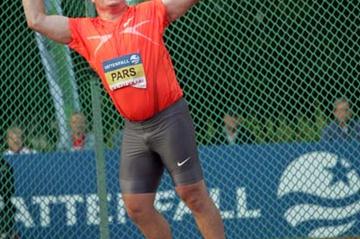 Hungary’s Krisztian Pars continued his long winning steak in the men’s Hammer Throw, while in the Triple Jump Olympic bronze medallist Leevan Sands was the winner, and the home crowd had something to cheer as 2007 European Junior champion Minna Nikkanen end the day with a new national Pole Vault record of 4.45m yesterday (8) in Lapua which was the second stage of the annual Elite Games series in Finland.

Karjalainen, whose first child was born a few days ago had four non-measured attempts before producing 77.32 in the 6th round, to confirm that he will be in the picture with fellow Olympic finalist Pars when it comes to the Wold championships this summer in Berlin.

Sands and Evilä the jumps victors

In the Triple Jump, Beijing third placer Leevan Sands of the Bahamas leapt a windy 16.96m (2.5m/s wind) to easily beat former World champion Charles Friedek of Germany who could muster only a legal 16.64 (1.2).

2005 World bronze medallist Tommi Evilä leapt 7.97m in the 4th round of the Long Jump to beat fellow Finn Mikko Kivinen who placed second in 7.85. Kivinen is one of the potential European U23 medallists this summer.

"I’m satisfied, anyway. I feel like being in a very good shape. Without a head wind I’d jumped over eight metres, and I think I can break my national record of 8.22 in a near future," said Evilä who has a best this year so far of 8.03m.

Bad news was that 2007 and 2008 Finnish champion Petteri Lax (8.11m PB in 2008), who had to pass rounds 4 to 6 due to pain in his back. Lax did not find the take-off board on his second attempt and his spikes slipped on the wax. Still Lax produced 7.79 in the third round for third place.

The Finnish record in the women’s Pole Vault of 4.35m was broken three times in Lapua. First it was Vanessa Vandy, who cleared 4.36m on her first attempt. Then Minna Nikkanen, took back the record with her second jump, but she was still not satisfied.

Nikkanen, who won the European Junior title in 2007, took only one jump at 4.45 and left the bar untouched.

Next Nikkanen rose the height to 4.50 and failed despite having a very good first attempt at it, but as Russia’s Tatyana Polnova, the World championship finalist, who had also cleared 4.45, didn’t make it either, Nikkanen took first place in the competition.

Because 4.45 is also the ‘A’ Entry Standard for the IAAF World Championships in Berlin and 4.35 the ‘B’, both Nikkanen and Vandy will be seen there. But before Berlin, this duo will compete at the U23 European Championships in Kaunas, Lithuania next week.

Nikkanen is now the number one in the U23 European year list. She did not have any training camp in Southern Europe last winter or spring, because she focused on her studies at gardening school.

"I had a good training before this competition and I just continued jumping in the same style today. I feel like I’m ready to use even bigger poles in
Kaunas," said Nikkanen.

Last year Vandy, placed 6th at the World Junior Championships, and won the Finnish title which gave her the Olympic team ticket to Beijing. In autumn 2008 she joined the same training group as Nikkanen, coached by Jarno Koivunen, and it has taken a while for Vandy to learn some new things in jumping technique.

Ari Mannio was a clear favourite in the men’s Javelin Throw as the top three Finns Tero Pitkämäki, Teemu Wirkkala and Tero Järvenpää had a rest day, with Pitkämäki competing this Friday (10) in Rome at the Golden Gala, AF Golden League where he remains a Jackpot contender.

Mannio had three non-measured marks before he produced 80.54m and showed once more that he is a big favourite for the U23 Europeans. Mannio has had six competitions this season and broken the 80m line in each of them.

"There’s no reason to worry, though I threw over the left sector for the first
time in my career," said Mannio.

Poland’s Urszula Piwinicka won the women’s Javelin with a 61.27m throw, while Finland’s Mikaela Ingberg, who will have her 15th major international
championships in Berlin this summer, produced a best of 59.57m for second.

Sandra Eriksson set a new U23 Finnish record of 9:47.53 in the women’s 3000m Steeplechase producing a fine solo run. Eriksson, 20, rose into 4th place in the U23 European year list and will be among the medal favourites in Kaunas.

Eriksson, 5th in the 2008 World Junior Champs (best European), also set the standard ‘B’ for the World Championships in Berlin by a margin of 0.47 seconds.

Antti-Pekka Sonninen for the IAAF