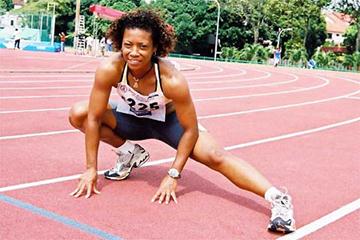 Manila, the Philippines   An impressive 12.94 100m Hurdles win for Thailand's Trecia Roberts signed off the 2003 Asian Grand Prix a triumphantly high note when in its fourth and final leg took place in Manila yesterday, 9 June.

The 2003 Asian Grand Prix Series, which was in danger of cancellation at one stage due to fears over SARS, concluded an undoubted second year of success in Manila. It's triumph was no better represented than by Roberts' world class win, ahead of Sri Lanka’s Sriyani Kulawansa (13.33 secs) and India’s Soma Biswas (14.15 secs). With it Roberts strode to a perfect four wins out of four, having triumphed earlier in the Hyderabad, Colombo and Bangkok legs of the series.

Sharing Roberts’ limelight as the only other female athlete to make a clean sweep of wins, was Du Xianhui of Singapore in the Shot. Though her distance this time was below 18m (17.80m) compared to 18.38m in Hyderabad, 18.07m in Colombo and 18.02m in Bangkok, she has served enough notice of her world class potential in this event. In any case Xianhui was still way ahead of her closest rivals – Singapore’s Zhang Guirong (17.35) and Kazakhstan’s Iolanta Ulyeva (16.68).

Coming to Manila, Ulyeva’s team mate 30 year-old Yelena Kashcheyeva was also on track, or should that be runway, for four consecutive wins! Unfortunately, the long jumper found the going too tough as she lost to Lerma Elmira of the Philippines. The home favourite’s victory was a total upset coming as it did with a personal best of 6.48m, while Kashcheyeva  managed only 6.24m for third spot, behind Thailand’s Wacharee Rittiwat (6.30m).

There was no such hiccup for another athlete from Kazakhstan, the talented men’s 100m sprinter Gennadiy Chernovol who won the 100m in 10.31 secs for his fourth victory in this series. Thailand’s Sithichai Suwanprateep (10.39 secs) was second while India’s Sanjay Ghosh (10.48 secs) finished third.

Yet it wasn’t smooth sailing for some of them. For example, Al Sathi had to fend off the determined challenge of Kazakhstan’s Mikhail Kolganov in the 800m before finally prevailing – with both athletes clocking the same time of 1:49.22. John Lozada of the Philippines finished a respectable third in 1:49.71.

Though Sri Lanka's Olympic 200m bronze medallist Susanthika Jayasinghe was already no longer in contention for a perfect sweep, having tasted a rare defeat in Bangkok after wins in Hyderabad and Colombo, all eyes were on her as she lined up for the 100m. This time round, there was no upset as she reasserted her supremacy with ease. She won in 11.32, ahead of  Uzbekistan’s Lyubov Perepelova (11.56) and Thailand’s Klomdee Orranut (11.58).

Summing up the series in the four cities, Mr. Maurice Nicholas, Secretary-Treasurer of the Asian Athletic Association said he was glad it had continued despite initial reservations because of the SARS outbreak.

“At first, there was talk about cancelling the series this year. Fortunately, we decided to go ahead. Despite the absence of some top athletes, we have seen some notable performances by a number of up-and-coming athletes. This augurs well for the future of athletics in Asia.”

The next major meet for athletics in this region is the Asian Championships to be held in Manila from September 20 to 23.