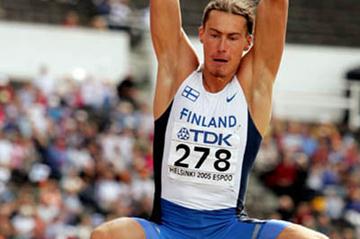 The sun shone on the Finnish capital for the  first time since Tuesday morning (9) and bathed the host nation’s team in some promising qualification round success, highlighted by a national Long Jump record.

The morning began well for Finland when Oskari Frosen, the national indoor record holder (2.31m – 2004) with a clean scorecard through his first three heights qualified for the men’s High Jump Final (Sun 14), sneaking through with a best of 2.24m. This is the first time in the history of the Worlds that a Finn has progressed so far in this discipline.

A few minutes later Mikaela Ingberg, ‘Miss Bronze’ of the women’s Javelin - she has bronze medals from the World Championships (1995), European Championships (1998 and 2002), and World Cup (1998 and 2002) - dug deep and pulled out a season’s best of 61.06m to qualify for Sunday’s final. She was later joined by Finnish record holder Paula Tarvainen, from the second qualifying group, who did the same with her third effort, a 2005 best, of 60.83m to reach the final too.

Between the two Javelin qualifications, the hosts’ not-unrealistic hope to spring a surprise in the men’s Long Jump at these championships, duly proceeded into tomorrow’s final in the most encouraging style. Tommi Evilä, 25 years of age, with his first jump leapt to 8.18m (0.9m/s) to break the 39-year-old national record of 8.16m set by Rainer Stenius in Los Angeles, California on 6 June 1966. That mark was shared by Jarmo Kärnä who equalled the record on 4 June 1989.

So why is this performance important in a world context? 8.18m is of course hardly an earth shattering performance.

Evilä has always been a massive talent but until last season had suffered from persistent back problems, and since he has shown his true abilities. He came fourth at the European Indoors this winter, and has so far had eight competitions this year (indoor and out) over 8 metres. His best performances have come in windy conditions with 8.27m (2.4m/s) to beat American Brian Johnson in Lapinlahti (3 Jul), and 8.22m (3.9m/s) behind World and Olympic champion Dwight Phillips in Helsinki on 25 July at the IAAF Grand Prix.

Winner of the European Cup “A” division final and third at the TDK Golden League meeting in Rome, Evilä who comes from the industrial city of Tampere, has a fiery reputation so unlike the usually reserved Finnish national character. He is prepared to ‘tell it how it is’ to the media, sparing no ones blushes, occasionally swearing on national television, or playing rock guitar, and being in general an individual. He is a showman per excellence and it is in this very respect that the atmosphere of the whole final will find its electricity. If you imagine the Finns only love Javelin, just wait until you here the roar of the crowd on the back straight, along which the Long Jump runway runs parallel.

Phillips who competed against Evila here a fortnight ago needs no convincing.

“It was crazy out there today,” confirmed the Olympic champion, “the crowd went mad. I am exceptionally happy for him (Evilä’s national record), and it will be great competing against him and all the other competitors. It is always good to have a local favourite in the any event, and we are going to be centre of attention on Saturday.”

Evilä exudes confidence. “I didn’t know that Ingberg had thrown but I heard the tremendous roar from the crowd, and knew it was the time to get myself going”

“My every concern and thought is about tomorrow’s final, the Finnish record comes just as a bonus. There will be no celebration about it, that will come in the autumn months. Now I only think about the final. The result (distance) is not important to me but the position is.”

For anyone reaching for their history books at this point, the last Finn to win a medal at a global level in the men’s Long Jump was Jorma Valkama at the 1956 Olympics, where he captured bronze. Evilä at least looks a good bet to match that feat tomorrow.

And then a 33-year-old record was equalled

33-years since the Finnish national record was set in the 4x100m (39.30 - Munich, 09.09.1972) at the 1972 Olympics, the national squad equalled that clocking when finishing seventh in tonight's qualification round.