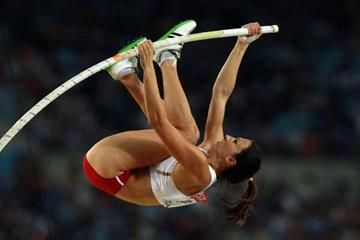 On January 11 Monika Pyrek’s benefit concert was held in the Contemporary Theatre in Szczecin, Poland, to mark the end of her athletics career. Less than 24 hours later Pyrek – who is currently four months pregnant – married Norbert Rokita, her agent and partner for many years.

Born in Gdynia on 11 August 1980, Pyrek and her older brother Robert were mostly brought up by their mother, Bożena. Their father, Zbigniew, was a seafarer and spent most of his time away. At school Pyrek excelled in basketball, but when the school gymnasium went through a renovation process, her PE classes were moved to Baltic Gdynia Sports Club’s hall. It was there where one of the club’s athletics coaches, Bogusława Klimaszewska, spotted Pyrek’s talent. They initially focused on the High Jump and her potential soon became clear when Pyrek jumped 1.66m at age 15.

At that time, distinguished Pole Vault guru Edward Szymczak visited the local stadium. After seeing Pyrek training, he suggested she took up the Pole Vault, which at that time was a new event for women. Although she wasn’t keen to begin with, Pyrek finally gave in to Szymczak’s suggestions and after just a few training sessions she cleared 3.00m, which at that time was the third-best result in Poland.

Her first domestic competitor was club-mate Anna Wielgus and in 2000 Pyrek ended Wielgus’s string of national titles – the first of 22 national titles won by Pyrek throughout career, indoors and out. Later that year she made her Olympic debut in Sydney, where she finished seventh with 4.40m.

In 2001 Edward Szymczak began working with Ukrainian coach Wiaczesław Kaliniczenko, whose input helped Pyrek. It proved to be her breakthrough year, winning bronze at the IAAF World Championship in Edmonton with 4.55m. Earlier that summer she had broken the European record with 4.61m. Although it was broken eight days later by Svetlana Feofanova, it was one of Pyrek’s proudest achievements.

In 2002, while competing at that year’s National Championships in Szczecin, local Pole Vault coach Viaczeslav Kaliniczenko talked Pyrek into changing club and one year later she duly obliged and became a Szczecin citizen.

And so began the best period of Pyrek’s career. She finished in the top-five at the 12 consecutive major championships (Olympics, World and European, indoors and out) between 2003 and 2009, winning medals in six of those appearances. Her best performances came at the 2005 and 2009 IAAF World Championships, where she won the silver medal on both occasions.

Undoubtedly one of her biggest rivals was countrywoman Anna Rogowska, the 2009 World champion and 2004 Olympic bronze medallist. In more than 100 competitions between the pair, both athletes maintained a friendly relationship.

Pyrek combined her sports career with education and in 2005 she graduated from the Faculty of Law and Administration with an MA dissertation on legal and administrative issues related to doping in sports.

She contributed to the revival of athletics in Szczecin, and athletes from the city began winning medals at the Polish Championships and representing Poland internationally. Fellow pole vaulter Przemysław Czerwiński reached the 2008 Olympic final and took the bronze medal at the 2010 European Championships. The city also played host to Paweł Wojciechowski’s 5.91m vault when he broke the 23-year-old Polish record.

Since 2006 Pyrek has been a member of the EAA Athletes Committee, and since 2009 she has chaired the Athletes Committee at the Polish Olympic Association. In 2011 she joined the IAAF Athletes Committee. In 2009 Polish president Lech Kaczyński awarded Pyrek with the ‘Order of Polonia Restituta’, one of the highest honours in Poland. A few years ago Pyrek revealed one of her other talents, winning the Polish version of TV show 'Dancing with Stars'.

Without doubt Pyrek is one of the best Polish athletes in the history of the discipline.

Paweł Bartnik for the IAAF