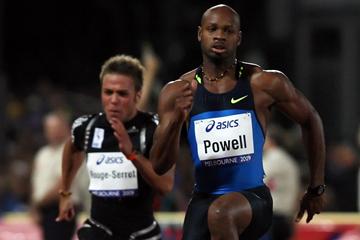 Powell looking for sub-10 in Melbourne

Former 100m world record-holder Asafa Powell has been confirmed to run in the men’s 100m at the 2013 Qantas Melbourne World Challenge on Saturday April 6, the opening leg of the IAAF World Challenge series.

Set to launch his track season just days after competing at the Stawell Gift, the Jamaican boasts an outstanding list of accolades including an Olympic and Commonwealth title, four medals from the IAAF World Championships, seven national titles and seven victories in the short sprint at the Samsung Diamond League since it commenced in 2010.

He now hopes to become the first person ever to break the 10-second barrier in Melbourne when he races on Lakeside Stadium’s blue track this April.

“I have some great memories of Melbourne and its fans, running there just a week after what will be a great outing at the Stawell Gift is a really exciting opportunity for me,” said Powell.

“I’ve never raced at Lakeside Stadium so that will be a fresh new experience, and I would absolutely love to be the first athlete to break 10 seconds there. That would make me the first person to break 10 seconds in Melbourne too. I have run under 10 in America, Europe and Asia so I suppose Australia is one of my last frontiers and to launch my season with a time like that would be sensational.”

Powell is no stranger to the Victorian capital, winning the men’s 100m in 10.03 in front of a full Melbourne Cricket Ground at the 2006 Commonwealth Games.

The 30-year-old, who in November became a first-time father to a daughter Argentina, returned to Australia in 2008 to clock 10.04 at the Melbourne Telstra A-Series event, before again thrilling the Olympic Park crowds with a 10.23 effort to win at the 2009 Melbourne Track Classic.

Now recovered from the groin injury that prevented him from firing at the 2012 London Olympic Games, Powell will provide an outstanding challenge for members of the Australian men’s 4x100m relay team as he begins his quest for a fourth appearance in the men’s 100m at the IAAF World Championships this August.

Now laying claim to the national and Oceania 4x100m relay record after a stunning 38.17 to qualify for the final at the 2012 London Olympic Games, that Australian team of Josh Ross, Anthony Alozie, Andrew McCabe and Isaac Ntiamoah are all set to start at the Qantas Melbourne World Challenge.