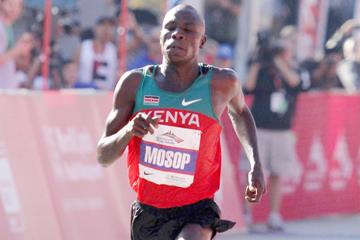 Organisers of the Volkswagen Prague Marathon have signed up one of the biggest names in distance running for the 20th anniversary edition of the IAAF Gold Label Road Race race on May 11 – Moses Mosop.

The Kenyan’s best time of 2:03:06, achieved on his debut at the distance on Boston’s record-ineligible course in 2011, makes him the second-fastest marathon runner in history.

The 28-year-old will also become the fastest runner to compete at the Volkswagen Prague Marathon and there are high hopes that he will crown the anniversary edition with a top-class performance.

“In this 20th anniversary year we shall have the biggest events and strongest fields in our history and we are proud that Moses Mosop will add his name to those of the many great runners who have run with us here in Prague: Paul Tergat, Haile Gebrselassie, Stefano Baldini, Patrick Makau, Zersenay Tadese – and now Moses Mosop,” said Carlo Capalbo, president of the organising team of the Volkswagen Prague Marathon.

Mosop was originally set to compete at the Boston Marathon on April 21, but his training was hindered by a knee injury and he didn’t have enough time to prepare properly.

“After getting injured in preparation for the Boston Marathon, I thought that there was no chance of a spring marathon for me,” said Mosop. “But then I heard from my management that the Prague organisers were interested in me.

“The path of a professional marathon runner is paved with challenges, difficulties and possibilities. This way I have the chance to run the Volkswagen Prague Marathon and experience the 20th anniversary of the event,” he added.

“I’ve heard a lot of good reports from other athletes and friends about the races in Prague so I’m looking forward to running there on May 11 and hope to run a time of between 2:06 and 2:07.”

But now Mosop, who is also known as “The Big Engine”, will be making his comeback at the Volkswagen Prague Marathon.