Various athletes took part in the traditional pre-event press conference and a series of press points throughout the afternoon on Thursday (8) ahead of the first meeting in the 2014 IAAF Diamond League series in Doha, Qatar, on Friday.

Mutaz Essa Barshim, Qatar’s recently installed world indoor high jump champion and the poster boy for the meeting, is preparing to float like a butterfly on home soil this year – inspired by Mohammad Ali.

The 22-year-old was happy to acknowledge during the press conference, which was being screened live to a worldwide audience, that he was a big fan of boxing, and in particular the man self-styled as ‘The Greatest'.

“I like Ali a lot. I read his views on everything. I think he is always inspiring,” said Barshim, ahead of what promises to be one of the outstanding events of the evening given the presence of Russia’s Olympic champion Ivan Ukhov, who produced a 2.42m indoor effort in February that only Cuba’s world record-holder Javier Sotomayor has ever beaten.

Also challenging will be Olympic silver medallist from the United States, Erik Kynard, and Canada’s Derek Drouin, who took a share of third place with Barshim in London and who recently reached 2.40m in his first outdoor jump of the year at the Drake Relays.

“I know the high jump now is better than ever,” he said. “We have three or four jumpers on 2.40m or over. The world record could go any time this summer, but it is hard to say who is going to make it. It’s really hard to predict.”

Barshim’s prediction of great things ahead in his event was shared by his three rivals.“I think we are in a bit of a golden age for the high jump,” said Drouin.

“I think the world record could go down in the next couple of years,” added the Canadian.

Kynard agreed with the Canadian’s appraisal. “I think it could happen this year,” he said. “The competition is so good but it is so hard to say who will do it. Whoever feels best on the day is going to take it.”

Ukhov admitted he had found it tough not to be able to follow up his Olympic win with the world record indoors this winter. “I really wanted it, and I was really disappointed not to get it. But I understand that it’s a strong record, and it’s not that simple to break it.”

Barshim is heading in the right direction as far as this meeting is concerned, having finished third and then second. Last year, he suffered from a back problem from early in the year. This year?

“I’m pretty good,” he said. “It’s still early in the season. I’ve had a couple of jumping sessions, but I am not preparing for high performance just now. There is a long season ahead, which ends for me in October, so I need to stay healthy until then.

“I will have my friends and family watching me tomorrow, but I don’t think it’s a pressure. I am doing what I like.”

On the subject of Doha’s bid for the 2019 IAAF World Championships, Barshim responded with a smile: “For every athlete it’s great to have a World Championship in your home country, where you have a home town crowd that supports you. But we are still talking about 2019 – I want to think about 2016 first!”

Shelly-Ann Fraser-Pryce, who won the 100m and 200m Diamond Race double last year, said she would be concentrating on the longer distance this season, although she competes in the 100m tomorrow.

“Doing the double last year was very difficult to do, although it gave me a lot of confidence,” said Fraser-Pryce. “This year I am just focusing on the 200 metres and looking forward to the rest of the season, and the Commonwealth Games.”

Her compatriot Warren Weir said he was “excited” to be opening his season in Doha. “I hope to go faster than last year,” he said. Fulfilling that short-term ambition would mean improving on the 19.79 he ran to earn silver at last year’s IAAF World Championships in Moscow, where he finished behind his training partner Usain Bolt.

However, the 24-year-old also has designs on the shorter sprint, for which his personal best stands at 10.02. “I’m also hoping I can go below 10 seconds for the 100m,” he added.

Asked what it would take to earn a gold medal, having taken bronze at the 2012 Olympics and silver in Moscow, Weir responded: “To get bronze was hard work. To get silver was more work. So to get gold will take even more hard work and dedication.”

As he looked ahead to an 800m meeting with Ethiopia’s world indoor and outdoor champion Mohammed Aman, Botswana’s Nigel Amos recalled how he had only trained regularly on a track for eight months before taking the Olympic 800m silver aged 18 when he followed David Rudisha home in the London.

“My target was to reach the final,” he said.

In the event he ran a world junior record of 1:41.73 to move to equal third on the all-time list for the event and required to be carried from the track after collapsing after the line.

Amos, like Bolt, a keen DJ, revealed that he was expecting to release a first album.

“It’s coming out next week,” he commented. Asked if he was able to go into the streets back home following his Olympic success, he responded with a grin: “Sometimes I can go out on the streets. Sometimes I can’t. It just depends on the street I’m in! In the city, I can’t go out, but in my home town it’s OK.” 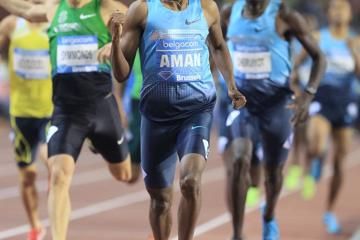 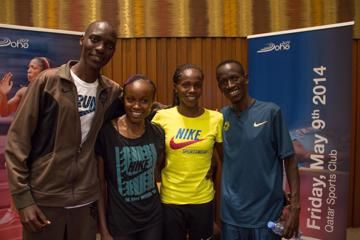 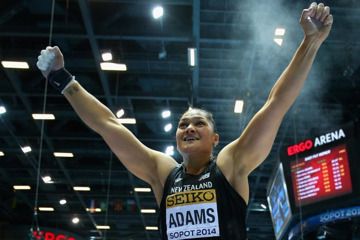