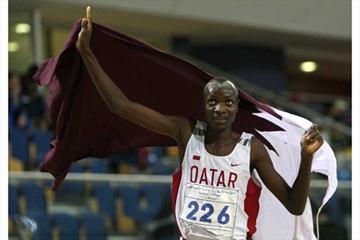 Thamer, who surprised by many by beating Qatar’s 2006 Asian Games 1500m champion Daham Bashir in Doha two weeks ago, looked convincing in his 3:40.86 victory on home turf, but admitted that he needs to run better against the world’s top 1500m runners.

“It was a good performance in Doha but I need to work harder for Valencia,” said the former Kenyan. “But I am hopeful of doing better at the world indoors.”

He will be joined in Valencia by Abubaker Ali Kamel, second behind Thamer in the Asian indoors, as the pair hope for Qatar’s first world indoor 1500m medal

3000m- No Shaheen, but Zaman could trouble favourites

Sultan Zaman was an impressive winner of the Asian Indoor title two weeks ago and will have to fill the shoes of reigning World Indoor 3000m silver medallist Saif Said Shaheen, the World Steeplechase record holder, who is still recovering from injury.

Zaman, who has a personal best of 7:49.31 for his only indoor appearance and originally hails from Burundi, has a range of experience from the 1500m to the half marathon, but is hopeful of mixing it in Valencia.

“I think I can run 7:35 with proper training indoors,” he said after his Asian indoor victory in Doha two weeks ago. “I will be training hard for a big performance in world indoors.”

James Kurui will be the other Qatari runner in the men’s 3000m.