The President of Austria Heinz Fischer met Paula Radcliffe and Haile Gebrselassie for a reception in the Vienna Hofburg during the marathon weekend in Vienna.

On the day after this honour the two runners were involved in the OMV Champions Race, where the Ethiopian chased the British World marathon record holder (2:15:25) over the Half Marathon distance. Having had to close a gap of 7:52 minutes Haile Gebrselassie still won comfortably with a time of 60:52 minutes compared to Paula Radcliffe’s 72:03 (11:11 time difference).

Having suffered bronchitis in the past two weeks Radcliffe was struggling and very disappointed with her performance afterwards. But she has not given up hope regarding the Olympic Marathon in London on 5 August. “I will have a short break now and then start my preparations for London,” said Radcliffe, who will watch the London Marathon next Sunday on TV.

“I did not feel well during my race in Vienna, which is a bit worrying for my confidence, because I will only run a few races before the Olympics. So I hope I will be able to run well in my next race,” said the 38 year-old, who has not announced where she will compete next. There could be only one or two more races for her before the Olympics.

Asked about the women’s marathon scene looking much stronger than in recent years with a number of runners producing sub 2:20 times, Radcliffe answered: “This is something beyond my control. I simply have to focus on myself and get ready. I believe it is possible for me to reach a sub 2:20 shape once more. If I can get there then I will have a chance. It will depend on the day. I have to get to that starting line as well prepared as possible and then give everything.”

When asked about the pressure in the build-up to the Olympics Radcliffe said: “Yes, of course there is pressure. But most of the pressure comes from myself. I really want to do well in what is probably my last Olympics. I have not done well in the past two. But to run in London, where I have friends, I know the streets, the food and so on, that is an advantage.”

Meanwhile, Gebrselassie was able to announce where he will run next. As last year the Great Manchester Run on 20 May will be his next competition. After this 10km race he will run the 10,000 metres in Hengelo. “This will be my last 10,000 metre race,” said Gebrselassie, who does not care anymore about Olympic qualification. “But I still feel good. There is only a small difference compared to 2011. I am just a bit slower now.”

“I really enjoyed running in Vienna a second time. And I hope to be back in the future. Maybe I will then run the marathon as a tourist,” said Gebrselassie, who then might meet Radcliffe again.

“I hope to come back to Vienna one day and run better,” she said after her 72:03 performance, which however was still good enough to break the course record.

So Vienna’s half marathon is one of very few races in the world that has both Haile Gebrselassie and Paula Radcliffe as course record holders. 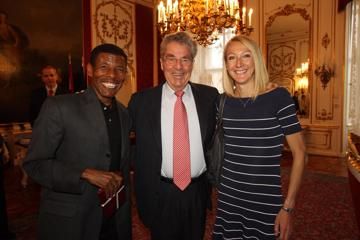