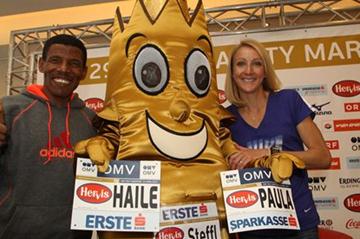 Radcliffe to get 7:52 minutes head start on Gebrselassie

Paula Radcliffe will get an advantage of exactly 7:52 minutes, when racing against Haile Gebrselassie in Vienna’s OMV Champions Race on Sunday (15). The two legends will compete at the half marathon distance in a unique chase race. It is one of a number of running events included into the Vienna City Marathon.  A total of 36,000 athletes have entered the various races of Austria’s biggest sporting event.

NOTE: see ‘Related Content’ under the photo to the right of this text to read the preview of the men’s and women’s marathons

“I have to thank the organisers for putting on this race – it will be unique, but in the end it is a competition! I am a bit worried though, because I have no information about Paula’s shape,” said Gebrselassie, who established Vienna’s half marathon course record a year ago with 60:18 minutes. The great Ethiopian, who won four  World and two Olympic gold medals at the 10,000m and set two Marathon World records plus another 18 official and 7 unofficial World records, is looking forward to running in Vienna again: “This is a great course with a great atmosphere.”

Asked about Paula Radcliffe the Ethiopian, who will turn 39 next Wednesday, said: "What can I say about Paula? We need athletes like her to keep athletics big. Paula is a symbol for our sport. She is very exceptional – people say her world marathon record will be very difficult to beat." Reflecting past championships, where Gebrselassie and Radcliffe had met, he said: “There is a difference between Paula and me this year – she will run the Olympics, I will only be there to watch her!"

On Sunday Gebrselassie will watch Paula Radcliffe running away from him at the start. The exact time difference had not been set before the press conference. Instead organisers turned to the athletes on stage to determine it.

“I had a difficult past two weeks because of a bronchitis,” said Radcliffe. “There were times when I thought I would not be able to come to Vienna. It got better this week and I could train for the first time on Tuesday again. Because of this I am not sure what I can run on Sunday,” confirmed the World marathon record holder (2:15:25). “This is something new and I am looking forward to it. May be the time difference should be the difference between our personal records,” suggested the 38-year-old.

Paula Radcliffe has run 65:40, but this was on the slightly downhill course from Newcastle to South Shields. So the time she was referring to in this case was 66:47. Gebrselassie features a PB of 58:55 minutes, which was a World record in 2006. The difference is 7:52 minutes. “Wow, that will be tough. But what can I do – okay, I will start 7:52 minutes behind Paula,” reacted Gebrselassie, who then turned to the audience saying: “Please wish me good luck!” Both athletes will have two runners going together with them into the race.

Radcliffe will start her race at exactly 8:50:38 am on Sunday. Gebrselassie then starts chasing at 8:58:30. Shortly afterwards the marathon race will be started and the mass race will follow at 9 am.

“I hope to be able to produce a good solid run and I would be happy with a time of sub 70 minutes. I hope it does not come to a sprint in the final 100 metres – in this case I know on who my money would  be,” said Radcliffe, prompting a quick reaction from Gebrselassie regarding the 70 minutes: “No, Paula, you have to run faster!”

At the end of the press conference Haile and Paula received a certificate since they had agreed to sign for the ‘Clean Running Campaign' initiated by the Vienna City Marathon some years ago. Elite and fun runners can sign up on the website and by doing so stress their will to compete in a fair way and support a drug-free sport. "This is a great idea. Clean Running celebrates everything that is good in running," said Radcliffe.