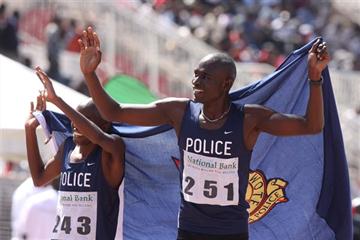 Only a sprinkle of new faces made the provisional Daegu roster that is fronted by three Olympic champions and all the four gold winners the country minted in Berlin two years ago.

Among the fresh names will be unheralded Hellen Obiri who caused the biggest upsets of the day when she scorched Olympic champion, Nancy Jebet Lagat at the homestretch in the women’s 1500m.

The consolation for those who missed out on Korea will be a trip to Maputo for the All Africa Games where Athletics Kenya (AK) selected over 70 athletes for the Pan African games that will run from September 3 to 18.

With eight of the world top 30 lining-up for the start of the men’s 1500m final, Commonwealth champion, Silas Kiplagat had the luxury of toying with the opposition metres from finish en route to setting a blistering soil record victory of 3:31.39.

“I told you I was in good form. Now, it’s off to Monaco then return to train for Daegu. My aim is adding the World Championship gold to my Commonwealth title but that is not for me to say whether it can happen. For now, I’m so happy,” the new Kenyan titleholder said.

Despite setting last year’s 3:29.27 world lead and adding the Club Games top medal in Delhi, Kiplagat came to one of the most anticipated finals with his prospects of making the Daegu team almost written off.

Augustine Choge assumed the early running before Chepseba took over. At the bell, it was everyone’s game before Kiprop made his first sustained push for the lead at the back straight and then Kiplagat made what appeared to be a suicidal move by edging to the front with 300m to go.

However, he accelerated and accelerated away from the field with Kiprop in desperate chase as Chepseba, Daniel Kipchirchir Komen and Collins Cheboi mounted their own frenetic battle for third.

With 50m to go, victory assured, the cocky showman turned back to face his rivals and wagged his finger at them in a demonstration of ‘I’m the winner’ before closing the line to confirm it.

“Today we lost to a very inform runner, he ran the fastest ever run here and could have been even faster if he went all the way. Now that we know the team, the focus is on going to win in Korea,” Kiprop who took second in 3:32.26.

Kipchirchir (3:32.47) who recovered from appendicitis and torn ligaments took third ahead of Cheboi (3:33.94) and Chepseba (3:33.96) in fifth but he was awarded the wildcard for Daegu.

Nothing much was expected of the corresponding women’s race. It was meant to be a coronation of the best female metric miler in the land, Olympic champion, Nancy Jebet Langat.

And so the script looked to be dutifully followed when she made a beeline for the finish with 250m from the line but fellow Defence Forces runner, Helen Obiri who made her 1500m debut this season had other ideas.

She altered the plot in devastating fashion when she deployed a sustained finishing kick that carried her past Langat to win the race in 4:08.68 to qualify for Korea (with B-standard qualification).

Another upstart, Joyce Chepkirui (4:08.80) also nipped the Beijing winner (4:08.90) for second but she was nonetheless given the nod to race for her country as she attempts to add the World title to her Olympic time for the second time after failing in Berlin.

Former World junior champion, Viola Kibiwott came fourth and was handed outside selection to the Worlds.

World 800m record holder, David Rudisha, put in another triumphant shift in the office when he retained his national title in 1:43.76, a mark still slower his 1:42.84 soil best but good enough to raise the decibels from the close to 15,000 adoring fans among them his partner Lizzy Naanyu, who packed Nairobi’s Nyayo National Stadium.

“Nowadays, I control the pace from the front. I was relaxed for the first 600m then pushed as we came to the end. Now, I’ve made the team and what remains is to go to Daegu and do my best,” the African and Continental Cup champion expressed.

The next stop for the Rudisha steamroller is Monaco as he continues his quest to defend his Samsung Diamond League crown before checking in Korea for his date with destiny.

African bronze winner and Berlin finalist, Jackson Kivuva (1:44.40) astonished even himself when he hang on the coattails of Rudisha for second as Olympic and World silver winner, Alfred Kirwa Yego (1:44.76) finished third.

The top three finishers were selected for Daegu. Commonwealth champion, Boaz Lalang, a stable mate of Rudisha was elbowed out of contention at the back straight as the charging athletes jostled for positions to make a beeline to the finish.

He was eighth in 1:46.88. “I’m so disappointed, almost embarrassed with the outcome but there will be another day,” Lalang said.

Jepkosgei off to Daegu too

Olympic and World silver medallist, Janeth Jepkosgei won the corresponding women’s race in 1:59.34 ahead of training partner, Eunice Sum (1:59.66) and youngster Cherono Koech (1:59.68) and the trio are Daegu-bound.

The name Peter Kirui never featured anywhere in the Daegu arithmetic when the previews for the men’s 10,000m metres were rolled out but the Administration Police runner caused the first big shock of the day when he led a deep field to the line in 27:32.1.

Kipchoge given the ‘wild card’ for Deagu

World junior 3000m champion, Isaiah ‘Chairman’ Kiplangat Koech engaged a searing burst with 200m to go to reign supreme in the men’s 5000m in 13:21.31 with Thomas Longosiwa, a Beijing Olympics finalist, causing jaws to drop after he bagged the second automatic place in 13:22.89.

“Even I cannot believe I have made the team after coming from a serious bout of typhoid and bad races. It can only be God’s will since my body just opened up,” the shell-shocked Longosiwa said.

Olympics and world silver medallist, Eliud Kipchoge (13:23.48) was third and won the wildcard to his fifth successive Worlds. “I’m so delighted,” he offered with a grin.

They will join defending World champion, Vivian Cheruiyot, who won the longer 10,000m in Day 2 on Friday at the Worlds.

Abraham Chirchir (8:22.34) pipped former world junior champion, Willy Komen (8:22.63) at the finish to finish third and earn the wildcard with Berlin champion, Ezekiel Kemboi, who sat the Trials out the other who will compete in Korea.

Again, the Milcah Chemos express was unstoppable in the women’s water and barriers races as Commonwealth bronze winner, Lydia Rotich (9:32.2) and Mercy Njoroge (9:34.0) filled the podium to join her in Korea.

Hurdler Vincent Kiplagat who won the men’s 400m Hurdles in 50.09 was included in the Worlds squad. There will be two individual runners in the flat 400m, University of Texas, El Paso student Anderson Mureta who claimed a thrilling 400m flat victory over Commonwealth champion, Mark Mutai (45.70 against 45.96).

Mureta and Mutai will be joined by Kivuva, Kiplagat, Vincent Mumo and Julius Kirwa in the men 4x400m relay line-up with Jonathan Kibet as a reserve.

The selected team will assemble for residential training on Tuesday (19).

Peter Mathu who led the team to Berlin will get his second outing at the role with Sammy Rono, David Letting (Marathon) and Joseph Ochieng (Race Walking) assisting him.

AK had earlier selected the ten marathoners who have been training for Daegu in the past two months.

No field athlete made the Kenyan World Championships squad.

Evergreen David Kimutai, 42, is in line for his fourth Worlds appearance after winning the men’s 20km event in a national record of 1:18:20 and will have bridesmaid, Josphat Sirma (1:21:50) for company in Korea.