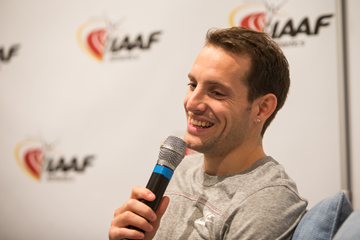 To mark the imminent beginning of the 2015 season of the IAAF Diamond League, pole vault world record-holder Renaud Lavillenie spoke to the press in a media teleconference this afternoon (28).

Lavillenie, the Olympic and European champion, is the only athlete in the world to have won the Diamond Race every year since the IAAF Diamond League began in 2010.

In 2015 he will be hoping to maintain that streak, as well as achieving the one accolade that has so far eluded him: winning the world title in Beijing.

Here are some of the highlights from today’s teleconference.

You have already opened your 2015 season at the Drake Relays last week. How do you feel at the moment?

Renaud Lavillenie: I have been training in Chula Vista where the conditions are good and it’s always warm and sunny. It’s got everything I need to jump well.

Compared to last year when I was starting out with a foot injury, this year was much easier. I’ve done a lot of good training and I’m very happy to be back at that level.

I went to Des Moines last week for the Drake Relays. I jumped 5.80m in the street competition they had, with wind and cold weather so I was happy with that. For the actual relays competition, the weather wasn’t very good so we jumped indoors. Although the conditions were perfect, the poles I had were not right and I only jumped 5.62m, but it was good to compete against the young American and Canadian guys and I was still happy. I'm now focused on my next competition, which will be in Doha.

You have the world record and Olympic title. What keeps you motivated?

RL: For next year my goal is to win a second Olympic gold medal in Rio. I’m still really excited and really motivated. My first Olympic title in London was a great competition which has given me good memories. I want to recreate those good memories at the next Olympics; that’s what keeps me motivated in training every day.

Some people speculate that you’re capable of going higher. Do you agree?

RL: When I watched a video of my 6.16m jump, we saw my body was over the bar by four or five centimetres, so I think I should be able to jump 6.17m. But it’s not about whether I can do it; it’s more about when. A lot depends on the conditions, especially outdoors. This winter I was close to making it a few times. I’ll keep working harder for that, but I just want to do my best in every competition.

What are your aims for the first IAAF Diamond League meeting of the year?

RL: For Doha my goal is to break the meeting record and set a world-leading mark. I hope I can jump about 5.90m, but we’ll see if the weather conditions will allow me to jump high. I’m really confident and I’ve done some really good training, so I think I can do it.

You have dominated the Diamond League every year. Are you disappointed your event isn’t more competitive?

RL: I’m not disappointed. I think my best quality is that I can be consistent in any situation. I’m able jump really high alone or in a competition with other guys, so for me it’s not a problem. Last winter and this winter I was able to jump over six metres without anyone pushing me.

Do you think someone can surpass Sergey Bubka’s achievements of 35 world records and six world titles?

RL: I don’t think there’s a chance that someone can do better than Bubka. To be able to win six world titles is just crazy. For me, that would be like winning world titles from now until 2025. When your first world record is 6.16m, the potential to go higher is more difficult.

How will you get ready for this year’s IAAF World Championships?

RL: I’m going to prepare in the same way I did for the European Championships last year. I’ll have my last competition in July, and then do two weeks of training. I’ll go to Beijing about eight or nine days before the qualification round; that give me enough time to adapt to the time zone and acclimatise to the weather.

Now that you’re the world record-holder, how has that changed things psychologically for you?

RL: Since breaking the world record, I don’t think a lot has changed in my mental approach. It has definitely given me more confidence, but I also feel under pressure more now because everyone expects me to jump higher than before. But it’s a good kind of pressure.