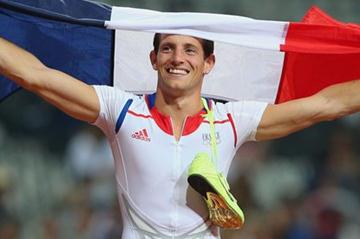 The 29-year-old pole vaulter was the star name announced by the French Federation in recent days and appears their strongest chance of taking gold in Rio.

Four years ago in London, Lavillenie claimed gold with a clearance of 5.97m in the pole vault final and he has been in impressive form so far this season, clearing a world lead of 6.03m indoors and more recently soaring over 5.95m to win his national championships in Angers.

Another who will no doubt have a podium finish on his mind is race walker Yohann Diniz, who despite being the fastest ever at the 50km event, has yet to win an Olympic medal.

Diniz failed to qualify for the Games in 2004, was unable to finish in the 50km event in 2008, then was disqualified at the most recent Olympics in London back in 2012. However, at his best he is almost unstoppable, as he was when setting the current world record of 3:32:33 to win the European Championships in Zurich two years ago. Diniz secured his place in the French team with a clocking of 3:37:48 to win the French national championships back in March, the fastest time in the world in 2016.

Two-time European heptathlon champion Ida Antoinette Nana Djimou is France's sole entrant in the heptathlon, where the 30-year-old will be keen to improve on her fifth-place finish at the London 2012 Olympic Games.

Hammer thrower Alexandra Tavernier will look to recapture the form that saw her throw 74.02m to take the bronze medal in Beijing last year, the 22-year-old holding a season's best of 72.16m this year.

Dimitri Bascou heads a strong trio of athletes in the men's 110m hurdles. The 28-year-old finished fifth in the world final in Beijing last year and took the European title in Amsterdam last weekend in 13.25. Earlier this week he improved his personal best to 13.12 when finishing second at the IAAF Diamond League in Monaco. He will be joined in Rio by compatriots Wilhelm Belocian and Pascal Martinot-Lagarde.

The athletics programme at the Rio 2016 Olympic Games runs from 12-21 August.