The Japanese athletics federation (JAAF) has nominated a team of 56 athletes to compete at the Rio 2016 Olympic Games.

The team features many of the athletes who were victorious at the recent Japanese Championships, including sprinters Shota Iizuka and Chisato Fukushima, distance runners Suguru Osako and Ayuko Suzuki, and javelin thrower Ryohei Arai.

It also includes the athletes who were selected earlier this year for the marathon and race-walking events, Japan’s highest quality athletics disciplines. Although 20km race walk world record-holder Yusuke Suzuki has been forced to miss the Olympics through injury, world 50km race walk bronze medallist Takayuki Tanii will go to Rio with realistic ambitions of taking a medal in what will be his fourth Olympics.

There could be additions made to the team before the 11 July deadline, pending any further qualifiers.

The athletics programme at the Rio 2016 Olympic Games will run from 12-21 August.

BACK
Pages related to this articleAthletes
Shota IIZUKA 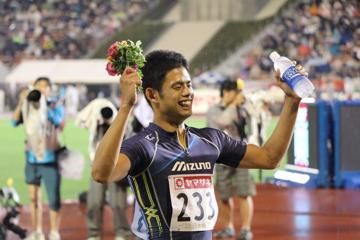