The quartet of Robles, Barrios, Martinez and Borges led a Cuban feast on Friday (28) as the Island collected seven of the 12 gold medals contested to ratify themselves on top of the medal tally.

Sixth off the blocks, Robles took the lead after the first hurdle and cruised to a comfortable victory in 13.10, seven hundredths of a second faster than the previous record of 13.17, set by his countryman and 2000 Olympic champion Anier Garcia in Winnipeg ’99.

“I had a minor contraction in the femoral biceps of my lead leg, but I was still in great shape. That’s why I could run at 90-92% and win,” said the 2008 Olympic champion and World record holder, who became the first Cuban to successfully defend the Pan American crown in the sprint hurdles.

Robles pushed Colombian Paulo César Villar and Cuba’s Orlando Ortega to personal bests of 13.27 and 13.30 for second and third. Villar was only 0.02 seconds shy of the South American standard.

On the infield, Barrios flung the Discus to a new personal best of 66.40m in the first round to renew her continental gold and break the 24-year old Games record by almost one metre (65.58m), set by her compatriot and 1992 Olympic champion Maritza Marten.

“I broke the Pan American record, held by a great Cuban for many years. My training partner told me I could break it today. I was feeling in good form and it’s a great feeling to end the season like this. I look forward to a well-deserved rest and prepare for the Olympics,” said a smiling Barrios after the victory lap.

In the men's Javelin Throw, Martinez’s only valid throw was a massive 87.20m in the first round, a national and Games record in the 14-man final. This effort now ranks him fourth on the 2011 world lists.

“I could not materialize my full potential in Daegu due to no prior competitions and a long flight from Cuba. I knew I had a farther throw in my arms and I achieved it today. I am happy to bring the gold medal to my daughter. I will continue to aim high, at 90 metres and a medal in London," said Martinez, who eclipsed his compatriot Emeterio Gonzalez’s Games record of 81.72m, set in 2003.

USA’s Cyrus Dean Hostetler (82.24m) grabbed silver, ahead of Argentina’s 18-year old Braian Ezequiel Toledo, who improved his personal best by nearly three metres to 79.53m to move up to third on the 2011 world junior lists.

A much awaited duel between Daegu bronze medallist Caterine Ibarguen and two-time former World and Pan Am defending champion Yargelis Savigne ended with a clear victory and a new continental mark for the smiling Colombian, who landed at 14.92m in the sixth and final round to smash the Cuban’s Games record of 14.80m, set in Rio 2007.

The Colombian had secured the gold from the first attempt with a Games record equalling 14.80m and completed an excellent series with two other leaps over 14.70m (14.73m and 14.75m).

“It has been an unforgettable year. This performance (her second best ever) is the result of hard work. The Pan Am Games are one of the biggest events in the Olympic cycle. This marks the end of the season and I will continue to aim big and work hard to achieve my goals,” said a happy Ibarguen, who added this gold to the bronze medal in the Long Jump.

Coming back after a minor muscle injury sustained at the World Championships, Savigne was never a major threat and had to settle for silver with 14.36m, ahead of her compatriot and 2009 World silver medallist Mabel Gay (14.28m), who repeated her bronze from four years ago.

Confirmed as a winner after three clean jumps and a first clearance over 5.70m, the 25-year old went on to shatter USA’s Patrick Manson’s Games best of 5.75m by one centimetre on his third attempt. He sealed a great afternoon with a 5.80m first-time clearance.

“I am excited to have broken the record and become the first Cuban man to win the Pole Vault in the Pan American Games history. My coach (Ruben Camino) won silver in 1987 and I am happy to have bettered that today,” stated Borges, who erased the sad memory of failing to score a valid height in Rio 2007.

Jeremy Scott (5.60m) and 2007 runner-up Giovanni Lanaro (5.50m) joined him on the podium. Brazil’s Daegu finalist and defending champion Fabio da Silva was never a factor and finished fifth with 5.40m, the same height that gave him gold in 2007.

The Brazilian girls, who ran the final in Daegu, improved their South American record (42.92) set in the Korean city to 42.85 to win their country’s first ever women’s 4x100m gold at the continental level.

Brazilian Kleberson Davide left Andy Gonzalez some room in lane one and the Cuban outsprinted him in the last 30 meters to claim the most important victory in his 800m career.

Friday’s performance propelled the Caribbean Island to the second place in the overall medal tally, behind the USA and ahead of Brazil for the first time since the Games started on 14 October.

Two more events will be contested this weekend before the Games officially close on Sunday: the 50km Walk on Saturday and the men’s Marathon on Sunday. 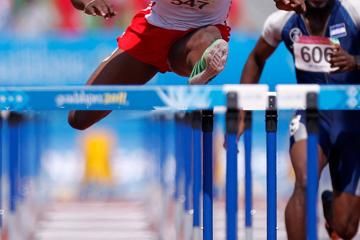