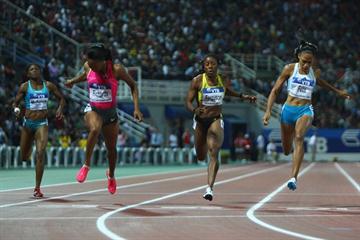 Rome, ItalyTwo spectacular head to head competitions will highlight the action in Rome’s Olympic Stadium on 26 May 2011.

Olympic and World champion and World record holder at 100m, 200m, and 4x100m, Usain Bolt, will face his Jamaican compatriot Asafa Powell, the former holder of the World 100m record, on the occasion of the Compeed Golden Gala, the third leg of the Samsung Diamond League circuit in 2011.

Bolt and Powell’s race over 100m will be an early season match-up between two these fast on their way to the IAAF World Championships, Daegu, Korea (27 Aug to 4 Sep 2011).

Another great challenge, a double one, will also been seen on Rome’s track in the women’s sprints as USA’s reigning World champions Sanya Richards (400m) and Allyson Felix (200m), will each attempt an audacious double running 200m and 400m, clearly showing their intentions to build up their best form on the way to Daegu.

In the official list of participants, another name has already been communicated, earlier in January, David Rudisha, from Kenya, the World record holder for 800m.

“It will be one of the most exciting editions of our Golden Gala”, said Franco Arese, clearly delighted by this outstanding field of participants. “We are working to let the Golden Gala be the focus of a whole week dedicated to athletics in Rome”, added Raffaele Pagnozzi.