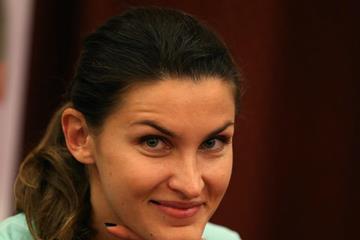 The focus was mainly on the jumps at the traditional press conference the day before the Golden Gala in Rome, the first European meeting in the 2013 IAAF Diamond League series, on Wednesday (5).

Vlasic was all smiles in the wake of her successful return to competition, after 20 months away from competitive action due to injuries and an infection, following her win at the IAAF Diamond League meeting in New York just 11 days ago.

One reason was that there was no physical reaction to the outing in the Big Apple.

"It will take some time until I feel no pain at all. It's always a huge stress to jump and it takes some time until the situation calms down. Usually, after three or four days it's okay and I'm ready to bother my Achilles again!

“But I’m not worried because New York was such a huge test for me and it was so cold. I was thinking, ‘If nothing breaks, I’m okay.’ I passed that test and I got examined at home and it showed that I didn’t do any harm to myself.

"I'm confident that I can manage to jump every seven days."

Vlasic admitted that it was emotionally grueling watching last summer’s Olympic final on TV and seeing her regular and long-term rival Chicherova - the pair have been competing against each other since the 1999 World Youth Championships - take the gold medal.

“I watched every moment of the Olympic final and I started to cry when she (Chicherova) jumped 2.05, because I knew how she felt, how this insane moment happened.

“I just started to cry because I missed that feeling so bad. It wasn’t easy; I wasn’t angry, I wasn’t disappointed, I was like, ‘I’m not ready, I’m not there’, but I couldn’t be indifferent. I was just sad I wasn’t there, it was a bouquet of emotions,” confessed Vlasic.

Chicherova paid tribute to Vlasic for her gutsy return to competition when some doubted she would ever don her high jump spikes again.

“I looked at her performance in New York and I want to say that, despite the conditions there, she jumped perfectly.

“She’s very strong (mentally), I can tell you. For high jumpers, when the track is wet, you are a little bit afraid.

“I can remember that when I came back after surgery with an injury, my first competition was when it was raining and I was so afraid. You think, ‘Why today? Just when I want to get things started again!’ I think step-by-step she (Vlasic) will get back to a high level again,” said Chicherova

After being the dominant high jumper in the indoor season, when neither Chicherova nor Vlasic competed, the 20-year-old Trost has been trying to adjust to sharing the spotlight with two latter day icons of the event, especially Vlasic who she has never competed against.

“It’s great to have Blanka back. She’s always been my idol. In fact, I bumped into her in the lift and I couldn’t say anything to her. I was star struck.”

After being unbeaten in five competitions prior to the 2013 European Athletics Indoor Championships in March, but then finishing only fourth in Gothenburg, both Chicherova and Vlasic had some consoling words for their new young rival.

“She’s young and very talented, just a little bit of patience and she will jump high. I thought she would be on the podium (in Gothenburg) but she needs more experience,” said Chicherova.

Trost admitted that the weight of expectation overwhelmed her slightly in Gothenburg. “It was a big surprise to me the amount of public attention I got for my jumping indoors and I wasn’t comfortable with it but now I’m learning to deal with it. However, I think I let the pressure and expectations get to me in Gothenburg.”

One man who rarely lets the pressure get to him is the USA’s current Olympic and World champion Christian Taylor.

However, his modest early-season form has had some pundits wondering about whether he had temporarily lost his edge, but he addressed those doubters in his usual calm and considered manner.

“It’s all about progression; I don’t know whether you’ve been able to see but I’ve been doing half-approaches and been quite successful, staying healthy, that’s a big thing," reflected Taylor.

“My coach and I have been just focusing on getting the technical side of things right. I’m very pleased about the way things are going and what the future has in store.

“I’m just going to try to keep getting these (Diamond Race) points and jump further.”

Taylor welcomed back France’s World indoor record holder Teddy Tamgho, who will be competing  in his first major international meeting in almost two years when he goes through his paces in Rome on Thursday.

“It’s not a small thing he’s coming back from but I’ve been looking forward to this since 2008. I’m thinking back to the World juniors that year and he dominated it. It’s been a long time coming, I’m excited. I’m hoping Phillips (Idowu) shows up as well. I’m here to compete. I want to be the best and if you want to be the best then you have to compete with the best.

“When you have that competition, it brings out the best in everybody. Having that energy, having that feel, it’s going to make some special things happen.

Since the end of last season Taylor has been based in Britain for much of the time after his coach Rana Reider took on a job with UK Athletics.

“It’s different. It’s not the Florida sun, but at times like this, coming to Rome, going to Doha, it’s only a short trip, so it’s worked out nicely when it comes to that.

“But I’m a warm body. I’m good at adapting to things but the cold is different. The (British) food I’m alright with, I’ve kept my head up,” joked Taylor.

France’s Olympic and European Pole Vault champion Renaud Lavillenie also sounded optimistic about what he can do in Rome’s Olympic Stadium, where the Golden Gala meeting record belongs to a certain Sergey Bubka at 5.94m from 1984 which, at the time, was a World record.

“I get the best opponents in every competition so every time it’s hard to maintain my best level but Rome is a good stadium, why not another world best performance?” said Lavillenie, who jumped a world-leading 5.95m in Eugene last Saturday.

American sprinter Justin Gatlin, the London 2012 Olympic Games 100m bronze medallist, believes he can cause a shock that would reverberate around the world and beat Usain Bolt and continue his 2013 unbeaten streak over the distance.

“It’s a select few guys who few guys who have beaten him, whether it’s a bad day or a good day. I just want to go out there and do a good job in this race tomorrow.

"If I didn't think so, I would have definitely gone home after the first cancelled flight. My season has been going really good, from Beijing to Shanghai to Doha and hopefully I can keep that streak going."

"I'm working on the finish of my race. I watched my races last year including the Olympic final he said. "They (Bolt and Blake) had extraordinary last 20 metres. So I've been working on that."

However, he discounted the fact that Bolt was not in the best of shape despite running a modest, by his standards 10.09 in the Cayman Islands last month, the World record holder’s only outing over the distance this season.

“I wouldn’t consider that a bad race, running 10.0 after an injury. You never know what to expect from a guy with the calibre of Usain Bolt.

"I like racing the top guys. You get a feel, you get a sense of your opponents' race strategy; how they prepare for races. Me and Mike Rodgers have already raced three times this year. I would love to race Yohan (Blake) and Tyson more often, as well as Bolt."

“If it’s a great race tomorrow then that will be the catapult that throws everything forward to the World Championships,” added Gatlin.