Towards the end of what he describes as a “perfect season”, British long jumper Greg Rutherford is already looking forward to his next challenge.

In fact, he has two – one in the sport; one rather closer to home.

Rutherford is competing in his second IAAF Diamond League meeting of the year at the Sainsbury’s Birmingham Grand Prix on Sunday (24), just a week after adding the European title to the Commonwealth gold he bagged in Glasgow last month.

Having already broken the British record back in late April, Rutherford has certainly delivered an emphatic response to those who dismissed his Olympic victory as a fluke when he underperformed at last year’s IAAF World Championships, suffering the after-effects of a hamstring injury.

Now with three major titles to his name, and outright ownership of the national record, the 27-year-old feels he needs just one more to complete “the grand slam” and is already training his sights on next year’s IAAF World Championships in Beijing.

Well, part of his sight, anyway, for he is also focused on the impending arrival of his first child with girlfriend Susie in October.

“It has been a perfect season in many ways,” said Rutherford, ahead of his Birmingham showdown with Diamond Race leader Jeff Henderson and China’s Li Jinzhe. “I think I’ve done more 8-metre-plus jumps this year than ever before.”

Indeed, he sits on top of the 2014 world list thanks to his leap of 8.51m, a jump that was the topic of much social media gossip and YouTube scrutiny.

“It was nice to get that biggie early on,” said Rutherford. “I know it caused a little controversy with some people, but for me I always expected to jump that sort of distance. It’s been a bit frustrating not to get back to that distance since.”

He achieved his main goal for the season by winning the Commonwealth Games title on home soil, then left Glasgow early to train hard for his 2014 double in Zurich, a competition he won with a leap of 8.29m on a day of swirling winds.

“It’s unusual for me to do well in two big competitions back-to-back,” he said. “It’s certainly been the perfect stepping stone to the next three years with the 2015 World Championships, the Rio Olympics and then the Worlds in London.

“Last year, the Olympic title started to feel like a bit of a burden, as if it had created expectations. Now, with two more major titles, my attitude has changed entirely. I’m much more confident that I can and should win major championships."

“Hopefully, I can now get the grand slam: that’s really important to me. I’ve got to win another medal on the world stage, that’s for sure. If I can win the world title as well I don’t think I’ll have to worry too much about people questioning me.

“To hold all four titles would be a major achievement. There aren’t many people who’ve been able to do that.”

Rutherford finished 10th when he was last in Beijing, which was for the 2008 Olympics, but said he “got a great feel” for the track which will stand him in good stead when he returns to the Bird’s Nest stadium next summer.

“I didn’t perform as well as I wanted to in 2008 but I’m definitely looking forward to going back there,” he said. “And if I can have another injury-free year then it’s all looking good for that world title.”

Before then, Rutherford has the small matter of October’s new arrival to cope with, a welcome addition to a household that already includes his three dogs – two chocolate labradors and one northern inuit.

His girlfriend is at the ‘eating strange foodstuffs’ stage (sponges, in her case!), but he is understandably excited about becoming a new dad.

“Becoming a father has always been something I wanted to do so I am very excited about it,” he said. “That outweighs any fears I have about lack of sleep or disruption. I’ll take time off at the end of the season, anyway, and have a good 10 weeks with the baby, so that will be great.”

David Rudisha is another athlete looking forward to next season, though for rather different reasons.

The 800m world record-holder steps into new territory at the Alexander Stadium tomorrow when he races over 600m for the first time in his career.

It will be his first competitive outing since he finished second to Nijel Amos in the Commonwealth Games final, a disappointing but not entirely unpredictable result for Kenya’s Olympic champion who describes this as his “comeback season” after a bad knee injury last summer.

Inevitably, tomorrow’s race is being billed as an attack on Johnny Gray’s world best of 1:12.81, but Rudisha is sensibly circumspect about his own expectations.

“It’s going to be an exciting race. It’s a rare distance but I’m happy to try it because it’s between the 400m and 800m which are the two distances I run.”

The event is not part of the 800m Diamond Race, of course, which Rudisha leads by a slender two points from Amos with one race to come in Zurich.

“It is going to be tough,” he said. “All the guys will be in that race, and some have run faster than me this year, but I have been doing some good training and I’m improving all the time.

“I’m not as confident as I have been in previous seasons, but I am getting better, so I would say there is a 50-50 chance of winning the Diamond Race.

“This season has been a big challenge for me because of the problems I had last year. I’ve been feeling my way back into shape. I started training very late and I did not have a good background this year.

“But I am happy with where my shape is now, so I just want to maintain my season now, and then focus on next year.

“I have not been 100% in training,” he added. “I am trying to be patient as this is my comeback season. Next year, I promise to back to my best.” 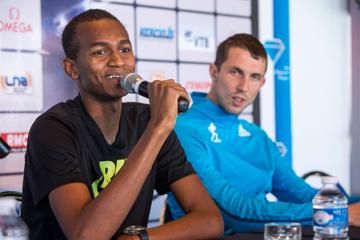