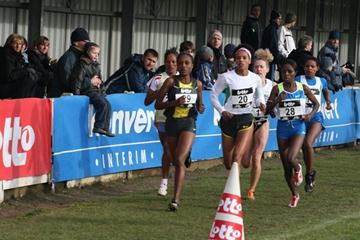 Dino Sefer from Ethiopia clinched his first international victory when he beat Kenyan Charles Kibet Chepkurui in a sprint finish at the Lotto Cross Cup - European XC Permit meet - in Hannut on Sunday (25).

The women’s race was equally tight. Kenyan Margaret Wangari Muriuki only moved past Ethiopian Mimi Belete in the very last metres before the line.

A leading group of six athletes was formed by the halfway mark. Ethiopians Sefer, Dame Tasama and Albert Kuma had done most of the work in front while Kenyans Charles Chepkok and Charles Kibet Chepkurui and Belgian Pieter Desmet just tried to follow the pace that was very fast indeed.

In the penultimate lap, Sefer accelerated once more and Chepkurui was the only athlete to hang on. It was clear that Sefer did not want to let the race be decided in a short dash. He started sprinting 600m out from the finish line and finally carved out a few seconds margin of victory over his Kenyan opponent.

Sefer appeared on the international scene when he finished 12th at the Super Grand Prix in Ostrava in 13:11.69. Last week he finished second in the Ouest France Cross at Le Mans and today he took an emphatic first international victory. “I’m very happy,” said Sefer. “The race was very fast and the field was strong. I’m glad that I was able to increase the pace all the time.”

Chepkurui, 15th at the World Junior Cross Country Championships in 2008 in Edinburgh, was not disappointed with his result. “This was only my second competition this winter. I’m happy that I could stay with the pace that never slowed down actually. Now my preparation continues for the Kenyan trials. I definitely want to be in the team for the World Championships in Amman.”

There was a nervous start to the women’s race with a big group of athletes staying packed together in the first two laps. But when Ethiopians Meseret Mengistu and Mimi Belete moved to the front the lead group was gradually spread apart.

A leading bunch of six athletes broke in two in the last lap, and Margaret Wangari Muriuki was the only athlete that could remain with the Ethiopians until the finishing stages of the race. With 300m to go before the finish Mengistu lost balance and fell, and the final sprint between Belete and Wangari was won by the Kenyan by the smallest of margins.

“I’m not a sprint finisher”, said Mimi Belete. “The level was very high today and I was with the leading group all the time. This is a great result for me.”

Wangari spoke very confidently after winning. “The race was very fast but I like it when the pace is pushed hard. I have run many cross country races this winter in Europe and I return to Kenya confidently about my form. I’ll have to prove it in the trials now.”