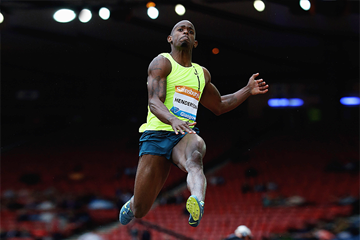 Henderson produced the three longest jumps in the world last year, including a world-leading leap of 8.52m to win the Pan American Games in Toronto. In a close competition in which two centimetres separated the top three athletes, Henderson finished second in Shanghai last year. More recently, he finished fourth at last month’s IAAF World Indoor Championships Portland 2016, just two centimetres away from a medal.

Lapierre will start his IAAF Diamond League campaign full of confidence after breaking the Oceanian indoor record to take the silver medal in Portland. The 32-year-old jumped 8.25m in the US city last month to match the colour of medal he earned at last year’s World Championships in Beijing.

World junior champion Wang Jianan will lead the Chinese challenge in Shanghai. He leapt an Asian U20 record of 8.25m to finish a surprise third at the IAAF Diamond League meeting in Shanghai last year, just one centimetre behind Henderson.

Later in the year, just two days short of his 19th birthday, he took the bronze medal at the World Championships in Beijing, finishing just one place behind Lapierre. Compatriots Gao Xinglong and Li Jinzhe finished fourth and fifth in Beijing and both men will be in action in Shanghai.

Li will be keen to re-assert his status as China’s No.1. Winner in Shanghai in 2013, Li won the Asian Games title in 2014, having set a national record of 8.47m earlier in the year.

Gao, meanwhile, is the Asian champion and jumped a best of 8.34m last year at the age of 21. No younger Chinese man has ever jumped farther.

Huang Changzhou will also be in the field. The 21-year-old took bronze in Portland last month with an outright PB of 8.21m, finishing between Lapierre and Henderson.