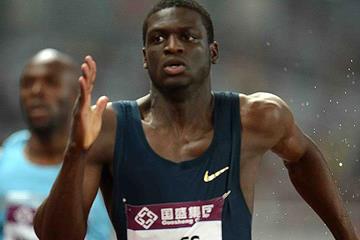 James and Merritt to meet in Shanghai – IAAF Diamond League

The world’s two leading one-lap runners will go head to head for the first time in 2015 at the Shanghai IAAF Diamond League meeting on 17 May.

World 400m champion LaShawn Merritt and Olympic champion Kirani James will clash at the second meeting on this year’s IAAF Diamond League calendar with important bragging rights to be won ahead of the IAAF World Championships this August.

These two athletes have been swapping global 400m titles since Merritt won the Olympic gold medal in 2008. The 28-year-old US sprinter went on to clinch the world crown in 2009 before James – the young talent from Grenada – emerged to claim both the world title in 2011 and the Olympic gold in 2012.

Meritt became world champion again in Moscow in 2013 and will be keen to retain his status in Beijing this summer.

The two met twice last year, most memorably at the IAAF Diamond League meeting in Eugene when they crossed the line virtually together. James was given the verdict after a photo-finish in which both clocked a world-leading time of 43.97.

They both dipped under the 44-second barrier again when they raced at Lausanne’s Athletissima meeting in July, James again coming out ahead with an area record of 43.74, a personal best and the quickest time in the world last year. Merritt was barely a stride behind in 43.92, his fastest of 2014.

James went on to win gold at the Commonwealth Games in Glasgow, while Merritt bagged the 400m Diamond Trophy and $40,000 Diamond Race prize as well as taking victory for the Americas at the IAAF Continental Cup in Marrakech.

After two great races last season, athletics fans will be hoping to see more fireworks from the world’s premier 400m runners when they meet in China in two months’ time. They have raced each other just once before at the Shanghai meeting, in 2013, when James equalled the meeting record of 44.02 to leave Merritt in second place.

“I love racing in Shanghai,” said James. “It’s always a very well-run meeting and there’s a great atmosphere in the stadium. I’m happy I have the opportunity to compete there again this year.”

More star names will be announced for the 2015 Shanghai IAAF Diamond League meeting in the next few weeks.