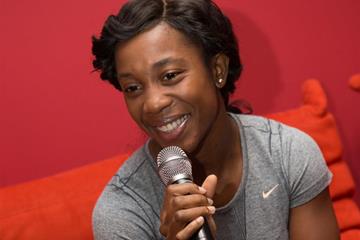 Ahead of the 2013 World Athletics Gala on Saturday, World 100m and 200m champion Shelly-Ann Fraser-Pryce spoke to the press about her past season and future goals.

“For me I’m never comfortable where I am. I always try to make sure I do better than before. In 2012 I think I had a good season, but I still thought I could do better. Now school is finally over for me, so I can train full-time. All my time now is dedicated to track and field, so I can just execute on everything I’ve been taught in training. I’m more confident and ready than ever before.

“The 200m is still something I enjoy, I still find it challenging. I’m still trying to find the right formula that works for me. My strategy for 2014 is to work a lot more on my 200m; I really want to make a mark in that event. Last year I found that doing 200s makes my 100m better. We’ll be doing more strength and endurance work in training this year to help me get below that 22-second mark.

“I’m not really a student of the sport. I don’t sit down and try to figure out if I’d be the first woman to achieve certain things. I simply want to do better than I have done before. After crossing the finish line at major championships, in my head I immediately start preparing for next year.

“A lot of people said I should run the first leg of the relay because I’m a good starter, but I hate it. I’ve always done it because I’m all for the team and what’s best for the team, but I don’t like running the first leg. This year I wanted to do something else, not necessarily the anchor leg but just something different. I finally got the opportunity to do that and it felt really good. When things happen the way you want, you feel more energy.

“My coach and I have not yet sat down to see what our agenda for next summer will be, but I’d love to do the World Relays. Obviously it can’t just be down to me though because you need a full team for a relay.

“I did three 60m races this year and I enjoyed them. The World Indoors is being held next year and I’ve never been to them, so that’s on the agenda. I’m looking forward to that.

“A lot of athletes become so overwhelmed with their success when it happens, they forget about the next year. I constantly try to remind myself that this is just one chapter in my journey. There are many more chapters to write and finish.

“I feel like if I become complacent, then everything I’ve achieved might fall. I never allow myself to fully unwind or have a vacation. Even when I have a break for a month, I’ll start to jog or do abs. It’s always about doing better and taking advantage of the present.

“Of all my rivals, I like to compete against Carmelita. When she lines up, she brings out a certain extra drive in you when you compete. She has that look and that technique where you know you have to get a good start because she has that technique that can kill you. It definitely gets me ready.

“You definitely earn a different kind of respect when you pull off a double. To be honest I’m up against very good girls who in their own right have done very well in their events. For me being nominated and shortlisted in the top three is an achievement in itself. I don’t know if I’ll win, but I’m still happy with the things I’ve done this year.”