Yarisley Silva improves to 4.75m to claim an upset victory at the Pan Am Games in Guadalajara (© Getty Images)

25 October 2011Cuban Yarisley Silva soared to a lifetime best and Games’ record of 4.75m to upset Brazil’s defending champion and World gold medallist Fabiana Murer while Kim Collins blazed to 10.00 in the semifinals to produce the fastest 100m time in Games history on the second day (24) of the athletics tournament of the 16th Pan American Games in Guadalajara, Mexico.

In the women's Hammer Throw, multiple World and Olympic medallist Yipsi Moreno bid farewell to the quadrennial rendezvous in great fashion as she produced her farthest effort since 2008 to clinch her third consecutive continental title in a Games record of 75.62m.

Following a breakthrough fifth place 4.70m at the World Championships, Silva had a faultless six-jump series, from 4.30m to 4.75m. She only secured gold after Murer failed twice over 4.80m after missing her first attempt over 4.75m.

The World indoor and outdoor champion struggled with her opening height (4.50m), before she finally cleared it on her third attempt. She then failed over 4.60m once and cleared 4.65m and 4.70m on her second and first tries, before missing 4.75m and 4.80m.

With the gold secured, Silva tried 4.80m without success, but produced one of the most brilliant performances in the Games history to give Cuba its first continental gold in the Pole Vault and take over the crown and the record from the Daegu winner.

“It has been an exceptional competition and I hope the Cuban people enjoyed it. I did my competition and I am happy I managed to outdo myself. We continued to train hard after the World Championships, hoping to achieve 4.75m one day and it arrived today. I will continue to aim for higher goals, including a medal at the Olympics, “said the 24-year old, who improved from her bronze medal in Rio 2007.

A calm Murer accepted defeat. “It is frustrating. Of course I wanted gold and I thought 4.70m would be enough to win, but the Cuban jumped extremely well, beat her record and deserved the win. Now I want to move forward, rest and focus on London.”

"It must be a shock around the world. It was difficult to clear the first heights because it was very windy during warm-up, but it calmed down when the competition started. The bar was moving back and forward and I struggled to clear the heights. But I have experience, calmed down and managed to get back in contention,” she explained.

USA’s Rebecca Holliday cleared 4.30m on her first attempt to complete the trio of medallists. Brazil’s Karla Silva and Venezuela’s Keisa Monterola followed with the same height, ahead of the Games inaugural women’s Pole Vault winner (1999) Alejandra Garcia of Argentina, who managed 4.20m.

Yarisley Silva’s performance propelled Cuba to the top of the tally of the athletics tournament with three gold medals on Monday. Yipsi Moreno and Daegu finalist Jorge Fernandez achieved the first two.

In her fourth and last Pan American Games, Moreno secured the Hammer gold with a 73.67m toss in the first attempt and after four fouls ended her series with a massive 75.62m, the fifth farthest throw ever in her decorated career and better than her 75.20m standard, set in Rio 2007.

“It is one of my happiest medals as these will be my last Pan American Games and I wanted to bid farewell in winning fashion. This is a medal for the Cuban people, my mom and son, my main sources of inspiration, and everyone who has supported me since my comeback,” said Moreno after the awards ceremony.

Daegu marked the first time Moreno missed the podium at a global event since 2000. After the World Championships, Moreno said, “I managed to compete more and improved some technical aspects. I came back to athletics after maternity with one main goal in mind: the elusive Olympic gold,” stated the Cuban, who had clinched the 1999 Pan Am silver in Winnipeg. She intends to retire after the London Olympic Games.

Canada’s Sultana Frizell improved from seventh in Rio to silver here, thanks to her fifth-round 70.11m effort, ahead of Amber Campbell of the USA (69.93m).

Collins impressive in the 100m

On the track, the second oldest man in the 100m field produced the fastest legal time ever in the 60-year history of the Games as 2003 World champion and Daegu bronze medalist Kim Collins of St. Kitts and Nevis ran 10.00 in the second semifinal, his best clocking since 2003 to confirm his intentions for Tuesday’s final.

Collins erased the previous Games’ standard of 10.06, set by Cuban Leandro Peñalver in Caracas 1983 and equalled by Churandy Martina in Rio 2007.

Brazil’s 2007 World Youth silver medallist Rosangela Santos ran a personal best of 11.26 to lead the qualifiers to the women’s 100m final. Other top favourites are her countrywoman Ana Claudia Silva, USA’s Barbara Pierre (11.37) and Laverne Jones of the US Virgin Islands. No Jamaican woman ran the 100m.

Cuba’s Daegu finalist Jorge Fernandez produced the farthest Discus throw (65.58m) at the Games since 1987, the year he was born, to retake the men’s continental gold his country last won in 1995. USA’s Jarred Rome (61.71m) and Brazil’s Ronald Juliao (61.70m) took the silver and bronze.

Jamaica’s defending champion and 2007 World silver medallist Maurice Smith leads the Decathlon after the first day with 4370 points, followed by Cuba’s World and Olympic bronze medallist Leonel Suarez (4238), Argentina’s Roman Andres Gastaldi (4202) and Cuba’s 2007 runner-up Yordani Garcia (4192). Brazil’s Luiz Araujo, with an 8115 PB to his credit, dropped out after feeling a severe back pain during the Long Jump.

Six finals are scheduled on Tuesday: both 100m races, the men’s Long Jump and Shot Put, with Canada’s World Championships silver medallist Dylan Armstrong defending his crown from Rio 2007. The program also features the women’s 800m, as well as the conclusion of the Decathlon, the first day of the Heptathlon and the 400m semifinals. 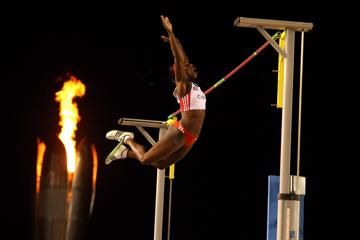