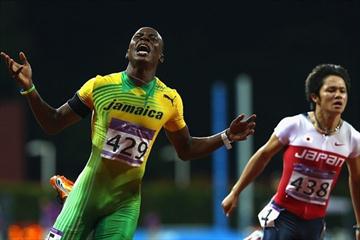 Athletes from every one of the five Olympic regions won gold medals, with 11 different nations represented.

Jamaica's Odane Skeen and Sweden's Angelica Bengtsson had huge expectations on them and they delivered, showing every indication that more gold medals will be in their futures.

Skeen in lane five of the 100m, might have figured his biggest rival was next to him on the right side. That was Great Britain's David Bolarinwa who had the year's best time and the fastest qualifier by one one-hundreth of a second over Skeen.

However, Japan's Masaki Nashimoto on Skeen's left side had the best reaction time while Bolarinwa had the second worst. In a style common to many of his countrymen, Skeen's smooth acceleration late in the race opened the winning gap over Nashimoto.

Bolarinwa rallied for the bronze medal. "I didn't get a good start," he admitted afterwards, "and it affected my race. I've only been in this sport for two years and I'm still learning."

Robin Reynolds in the 400me did Jacobs one better, with the American team's first gold. She didn't let Nigerian Bukola Abogunloko's blazing start rattle her, winning in 52.57 as Romanian Blanca Razor (53.10) passed Abogunloko (53.47) on the homestretch.

Cuba's Yordan L. Ofarill had the best credentials coming into the YOG with a PB of 13.26 in the 110m Hurdles. However, Australian Nicholas Hough served notice in the qualifying with a 13.50. In the final the Cuban got off quickly then faded as Hough moved strongly through the last half and earned the gold medal in a PB of 13.37. China's Wang Dongqiang was close behind at 13.41, also a PB.

After safely securing the gold medal in the girl's Pole Vault at 4.30m, Bengtsson asked for the bar to be set at 4.52m. Why not 4.48m, one centimetre better than the World junior record? It was a different record she was aiming for, the Swedish national record, but tonight was not the night as the 16-year-old didn't come close on her three attempts. Australian Elizabeth Parnov won silver (4.25m) and Ganna Shelekh of the Ukraine the bronze (4.20m).

In another vertical jump Israel's Dmitry Kroytor and Australian Brandon Starc both high jumped over 2.19m, with Kroytor taking gold. Viktor Chernysh of the Ukraine was third at 2.17m.

Lena Malkus was the second of two Germans in the field events to win gold. She edged Romanian Alina Rotaru by two centimetres in the long jump (6.40m to 6.38m).  Le'Tristan Pledger earned the USA's first medal with a bronze (6.17m).

Earlier Shanice Craft gave an awesome display in the Discus as all four of her throws, topped by a personal best 55.49m, would have been good for gold. The other medals went to Hungary's Krisztina Varadi (49.92m) and Sweden's Heidi Schmidt (47.57m).

There was a small upset in the boy's Discus as 2010 world leader and top qualifier Arjun Kumar of India had to settle for silver (62.52m) behind South African Jacques du Plesis (63.94m). Jaromir Mazgal of the Czech Republic was third (60.31m).

Singapore's tropic climate played a key role in the girl's 5000m Race Walk, and even though the race began at 7:00 in the evening it was still hot and humid. Alina Galchenko of the Ukraine passed the first of 12 and half laps (unlike the Olympic Games the walks are held entirely on the track) in 1:46 and pushed the lead into the final kilometre, still several metres ahead at the bell.

However, Galchenko had made her move too soon as she staggered around the final lap in 2:08 and was passed by five girls. Italy's Anna Clemente had the best finish, crossing the line in a PB 22:27.38. Mao Yanxue of China was two seconds behind (22:29.42 PB) for the silver and Nadezda Leontyeva of the Russian Federation, second for much of the race, took the bronze (22:35.05).

Favourites shine in the morning

The first gold medal in athletics went as expected to 100m hurdler Ekaterina Bleskina of the Russian Federation. The 2010 World Youth Leader (13.28) and fastest qualifier at 13.32, was is control from the halfway point, clearing the ten 76.2cm hurdles in 13.34 ahead of Michelle Jenneke of Australia and Noemi Zbaeren of Switzerland.

The initial boy's gold medal in the 400m also was awarded to the favourite. Luquelin Santos of the Dominican Republic, who had run 46.19 in June and 46.82 in qualifying, did not break 47 seconds, but a fast start gave him enough of a lead to hold on for a 47.11 victory.  Both the silver medallist, Ruan Greyling of South Africa (47.22), and bronze medallist, Aifas Kishoyan of Kenya (47.24) set personal bests.

Santos employed the same strategy that led him to his personal best, and a place in the final of the 2010 World junior championships. "My coach told me to run the first bend fast, maintain this to the 150m mark, then close the race in the final straight," he said. "My finish was bad and the time isn't great, but it doesn't matter.

"The important thing was to get to the top of the podium," he said.

Surely a common feeling among the champions on the first ever day of medal competition at the inaugural Youth Olympic Games.