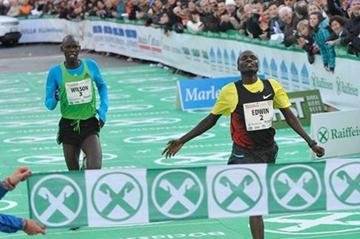 Bolzano, ItalyVivian Cheruiyot, the 5000 and the 10,000m World champion on the track in Daegu and World Cross Country champion in Punta Umbria, and Olympic 5000m bronze medallist Edwin Soi took the honours in two close and dramatic races at the 37th edition of the Boclassic Silvesterlauf in Bolzano on Saturday (31). It was the fifth Kenyan double win in both the men’s and women’s races in the history of the popular Sudtyrol town.

Cheruiyot beat surprising 20-year-old Ethiopian Afera Godfay in a close 5Km women’s race in which both runners clocked 16:03. Soi scored his fourth victory in his favourite race after victories in 2007, 2008 and 2009. Last year his winning streak in the Boclassic was broken by Ethiopian Imane Merga who beat Mo Farah and Soi.

The 10Km race set off at a fast pace thanks to the initiative of Frenchman Abdelhatif Meftah who took the pace in the early stages with five men in the leading group which also featured Kiprop, Soi, Merga and Italian-based Abdelaziz El Idrissi from Morocco, who clocked a surprising 2:08:13 in the Turin Marathon  last November.

Kiprop ran in the front of the leading pack for most of the race (3:35 in the first lap and 7:08 after two laps). During the third lap Kiprop, Soi, Merga and surprisingly Idrissi, who managed to keep pace with the three African stars, opened up a gap over Meftah who began losing ground.

Kiprop continued to push the pace in the front during the fourth lap. Soi and Merga kept up with him, while Idrissi followed two seconds behind.

The two Kenyans pushed hard in the attempt to break away from Merga during the fifth lap and their gap over the Ethiopian grew from two to 13 seconds after the sixth lap (21:18 to 21:31).

Kiprop threw down the gauntlet but Soi followed him closely and it came down to the wire in the final lap where Kiprop tried to launch his first attack but Soi responded quickly with his counterattack. The two Kenyans engaged a close neck-to-neck battle with a series of attacks and counterattacks. The race was not decided until the final straight where Soi edged Kiprop in the finishing sprint. Soi crossed the finish-line in 28:16 to Kiprop’s 28:17. This is the fastest time run in Bolzano since the 1998 edition. With his four wins the Kenyan is coming close to Sergiy Lebid’s record of five Boclassic victories.

Merga, who is carrying a minor foot injury, had to hold off the final attack by Idrissi defending his third place by two seconds in 28:57.

“It was a very hard race in the last lap,” Soi said. “Kiprop pushed hard but I managed to keep on. Next year it’s going to be a better year than 2011. I will run at the Campaccio before going back to Kenya to prepare for the indoor season. The Boclassic is definitely my run. I am so happy about my victory. This was the best possible start for 2012 which will be a decisive one for me. My aim is the 5000m in the Olympic Games.”

“I was quite confident before the run because I have defeated Merga recently in Houilles near Paris. I really want to become record holder of this event. I am sorry that last year I did not win, otherwise this would have been my fifth victory in a row. But I’m only 25 so I still have time to catch up with Lebid.”

“I led the race for a long time, so I am a bit disappointed,” said Kiprop. “I tried to outdistance Soi but I was not successful. My goal for 2012 is to run the 10,000m at the Olympic Games and to set a new PB in the Half Marathon.”

“I could not prepare as I wanted because of a foot injury,” Merga said. “For this reason I am happy with my third place. I want to return next year with an Olympic medal.”

The women’s race was no less exciting thanks to the great race run by Ethiopian Atera Godfay who posed a serious challenge to Cheruyiot , the Boclassic defending champion whose win was far from easy.

No less than 15,000 spectators attended the popular Boclassic event and the great race run by local favourite Silvia Weissteiner added to the excitement for the enthusiastic fans who packed the stands in the Walther Square. The Italian runner, 2007 European Indoor bronze medallist in the 3000m and seventh placer at the 2009 World Championships, managed to keep up with Cheruyiot and Godfay until the bell sounded for the final lap. It was an encouraging race for Weissteiner who had to battle with injury problems in recent seasons and is now on the comeback trail.

Cheruiyot, Godfay, Weissteiner and Portugal’s Cross Country and Marathon specialist Ana Dias broke away from the rest of the field after two laps when the lead pack whittled down to just three women.

At the bell Cheruiyot and Godfay pulled away from Weissteiner who lost ground on the two Africans but did not give up.

Godfay, eighth in the junior race at the 2010 World Cross Country Championships, managed to keep the pace with Cheruiyot until the final strides. Only in the final straight Cheruiyot, the 2010 and 2011 Samsung Diamond League winner in the 5000m, managed to hold off Godfay in a breathtaking finish in which both clocked 16:03.

“I started my preparation later than last year and I have been training for one month,” said Cheruiyot. “It was not a good race but I am happy with my second win in Bolzano. I would like to return next year with the Olympic gold medal in the bag.”  Cheruiyot added that she’ll contest two indoor races this season but wasn’t planning to compete at the World Indoor Championships.

Weissteiner was the most cheered athlete by the local crowd and the Italian runner repaid the support with a great race. “It was a big honour to keep the pace with Cheruiyot and run shoulder to shoulder with her until the bell,” Weissteiner said. “Finishing on the podium in Bolzano in such an important race is very special. I will now run in the Campaccio before a period of training in Riva degli Etruschi in Tuscany. I am planning to run the indoor season with the goal to qualify for the World Indoor Championships.”