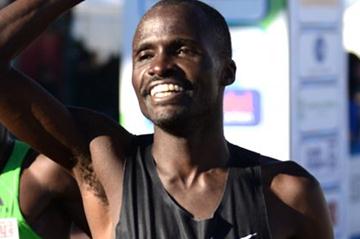 Edwin Soi, 2008 Olympic 5000m bronze medallist and 2012 World Indoor 3000m bronze medallist, last month in Istanbul, scored his fourth win at the 28th edition of the Media Blenio 10km Road Race beating his compatriot Thomas Longosiwa by three seconds in 28:31 on a sunny but windy day in Dongio which is located in the Italian-speaking region of Canton Ticino in Switzerland.

The race set off at a conservative pace in the first lap (3:59) as Ngugi took the early lead together with Longosiwa in a pack which featured Kenyans Soi, Daniel Kinyua, Kwalia, Tesfaye Felfele, Solomon Tesfamariam from Eritrea and Ethiopia’s Tolossa Chengere. Lebid chose to follow his own pace and was in eleventh place after the first lap.

Ngugi increased the pace during the second lap which was run in a quicker 3:29. His initiative whittled down the leading pack to six men: Ngugi, Longosiwa, Kwalia, Soi, Kinyua and Ethiopian Yacob Yarso, the winner of the 2012 Stramilano Half Marathon. Lebid was still in tenth position but gradually reduced his gap lap after lap and caught up with them during the third lap.

Ngugi made most of the pace running in the front during the fourth lap together with Longosiwa. They clocked 14:33 at the end of the fourth lap while Soi followed closely one second behind with Kwalia and Kinyua. Lebid ran a good race and managed to keep up with their pace until the fifth lap.

The race really hotted-up during the sixth lap when Ngugi, Longosiwa and Soi changed gear breaking away from Kwalia who began losing the ground with two laps to go.

Soi and Longosiwa launched their decisive attack dropping Ngugi with one lap to go. The penultimate lap was quicker than the previous ones as they clocked 3:28, after which the leading pair engaged in a neck-to-neck battle which went down to the wire until the final straight when Soi launched his devastating kick to romp home in 28:31 three seconds ahead of Longosiwa.

“I won at the Campaccio and in Dongio in 2008 and then I went on to win the Olympic bronze medal in Beijing. I won the same races this year and I hope to repeat this feat this summer in London. The wind did not disturb me at all today. I ran a good race against very tough rivals. I will make my debut on the track in the 3000 metres in Doha next month”, said Soi.