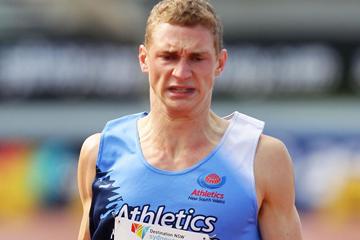 Solomon won the 400m at the Australian junior championships which concluded in Sydney on Sunday (18) in 45.99 seconds, a season’s best for him. The Sydney 18-year-old (he turns 19 on 16 May) has a personal best of 45.58 set last year and ran the heats of the 4x400 in Daegu last year. He also ran the relay at the last World Junior Championships in Moncton, Canada, in 2010.

Solomon is likely to be joined by a record number of teammates for an overseas championships in Barcelona. Under the Australian selection criteria, athletes were guaranteed selection to the team provided they had achieved a selection standard (tougher than those set by the IAAF) and won at the championships.

Although the exact size of the team will be subject to the two-per-event entry limit the number of athletes competing in Sydney who had achieved the standard was 60.

The only likely returnee on the women’s side from Moncton 2010 is Brooke Stratton, who won the horizontal jumps double at the championships.

Stratton, who finished sixth in the Long Jump two years ago, won that event with a distance of 6.51m having earlier achieved 13.34m in winning the Triple Jump.

Singapore Youth Olympic champion Nicholas Hough will compete in the 110m Hurdles in Barcelona after winning that event in 13.71 at the championships. Hough is also qualified for both sprints, although he did not run either at the championships and 2011 World Youth Championships finalist Hugh Donovan won the 200m from another Barcelona-qualifier in Benjamin Jaworksi.

Jarryd Buchan, a semi-finalist at the World Youth Championships in Lille last year, is likely to join Solomon in the individual 400m.

Monica Brennan, a finalist in the 200m in Lille, won that event at the championships from Carla Williams, who won the 100m and is qualified for both sprints.

The women’s 400m Hurdles was one of the strongest events for depths at the championships with the first four all running under the Australian standard for Barcelona. Sarah Klein won in 58.02, breaking the championships record held by Jana Pittman, from Tessa Consedine, who was also under Pittman’s mark with 58.07.

The women’s 1500m was the stand-out event with three qualified athletes contesting the two spots available. Katelyn Simpson, a finalist in Lille, won in 4: 20.58 from Jenny Blundell, 4:22.47. The selectors may have to do some thinking on the second spot: third-placed Anna Laman has a best of 4:13 but was coming back from injury.

Discretion will be required in the men’s 800m, too, in which the two qualified athletes – Rob Lister and Joel Hogarth – were beaten into second and third place, respectively, by unqualified winner Rorey Hunter in a slow-run race.

Starc was silver medallist at the Youth Olympic Games in Singapore in 2010.

Brodie Cross and Paris McCathrion, who compete for Box Hill, the Melbourne club where Steve Hooker and Emma George began their careers, won the men’s and women’s pole vaults.

Liz Parnov, who has already been nominated for the London Olympic Games team after defeating Alana Boyd in the selection trial, has the qualifying standard for the World Junior Championships as well. She did not compete in Sydney.

Joining Brooke Stratton in the women’s horizontal jumps (subject to final selection) will be Margaret Gayne (Long Jump) and Josie Nichol, whose 12.90m in the Triple Jump equalled the required standard.

Shot putter Damien Birkinhead is certain to head a strong group of throwers making their way to Barcelona. Birkinhead, fourth in the Youth Olympics, threw 20.35m to win in Sydney.

In the men’s discus, Denny Matthews satisfied the criteria for automatic selection with a win in 55.39m from World Youth Octathlon champion Jakes Stein, who achieved the individual qualifying distance with 55.64m.

Jack Dalton and Robert Johnston were first and second in the hammer, both exceeding the qualifying distance while in the javelin, Luke Cann and William White appear likely to lock Lille Youth Championships finalist Elliott Lang out of the team.

The women’s discus was another event with multiple qualifiers, but Taylah Sengul (53.15m) and Keshia McGrath-Volau (52.46m) finished in the coveted first and second positions and appear certain to be bound for Spain.

Danielle McConnell and Mikayla Genge (hammer) and Wasie Toolie ((javelin) complete what is likely to be one of the strongest groups in the team.

Walkers Rachel Tallent, younger sister of Jared, and Blake Steele booked their places with wins in the 10,000m track walks.

The Barcelona team, along with multi-eventers who are yet to have their national championships, is expected to be finalised within the coming two weeks.